A male stripper is calling for better working conditions after he was scratched and had his penis bitten during a show.

Lotan Carter has said he wants stricter limits on what attendees are allowed to do to him while he's performing.

He said that both women and men have "taken it too far" during his shows and that he has been "handled in a way which isn't really very nice."

He told Ruth and Eamon on This Morning:

"You have to have a certain character to be in this line of work. It’s sad that it’s become commonplace, but it is commonplace. It’s not everyone.

"There was part of a routine where a woman was stood behind me and I’d rub her hands down (my chest) like this, and she scratched and I was like 'please don’t do that.'" 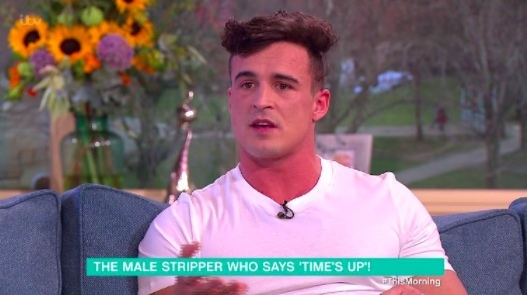 Lotan said that the woman continued to scratch until he bled, leading to him having to walk off stage.

He also recounted a time that a woman bit his penis during a routine that involved him putting a towel over her head.

The 28-year-old explained the incident.

"I got down to a towel, wrapped the towel around my waist and took my underwear off, and then you stand in front of them.

"The idea is, for the audience, it looks like you’re wrapping a towel around their head and they’re seeing everything but they’re not. She bit my privates."

Lotan said that he wants better working conditions for male strippers, and tighter security during shows.

However, he also said that he thinks it is "unlikely" that this will happen anytime soon.