PIC: One Mum Caught Her Son Dry Humping… And Baked This Cake

Now this really takes the biscuit. Or the cake.

One mum walked in on her son and his girlfriend in a really compromising position. You know that awkward moment before sex, where grinding is still an option? Well it’s probably not the time for a visit from mum

(Although after this, we’re not sure they’ll be in the mood for a while…)

Following the sexcapade, one mother decided that there’s nothing that can’t be saved with cake… and then this happened: 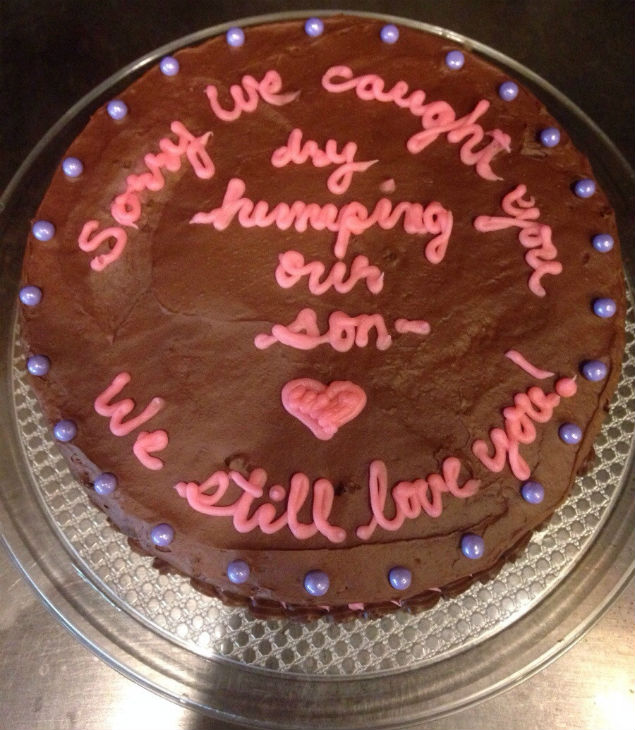 END_OF_DOCUMENT_TOKEN_TO_BE_REPLACED

Imgur user ‘One_Skinny_Mexican’ went on to say his mother had another plan to surprise his girlfriend with the cake, but had second thoughts:

‘[she] wanted to make the cake, organize a flash mob, and present it to my girlfriend at her workplace’.

We can’t decide if this mum is an absolute legend or an evil genius.

Either way, at least there was cake?!

popular
These are the top baby names for 2022
Man charged in connection with Ashling Murphy's murder
Teen who pushed girl “head first” under Dart to face trial in adult court
Netflix shares more pictures from Bridgerton season 2
Bob Saget's wife Kelly describes him as "the best man" she's ever known
People are only realising Kendall Jenner and Gigi Hadid are related and the reactions are gas
Here are the Covid restrictions that may be lifted as early as next week
You may also like
1 year ago
Drinking coffee can help ease pain in some cases, according to research
2 years ago
Nutritionist says eggs are an essential breakfast food and we're okay with that
2 years ago
Eating a banana for breakfast is actually a pretty bad idea
2 years ago
Got your period? Try to avoid these foods as much as possible
2 years ago
This is why you should avoid ordering soup when out for a meal
2 years ago
Study shows people who go to sleep at this time consume more calories
Next Page