PICTURE: An Anti-Rape Campaign That Finally Gets It Right

A recent spike in reports of rape amongst students in the Manchester area has lead to a #NoConsentNoSex campaign that students and sexual assault centres are lauding for finally getting the message right.

Police in the the Greater Manchester area have received double the amount of student rape reports between August and October in comparison to the same period last year, increasing from 15 last year to 30 this year.

The victims were between 18 and 24 years of age. 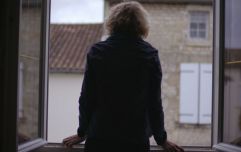 END_OF_DOCUMENT_TOKEN_TO_BE_REPLACED

Now, posters with the tagline "Drinking is not a crime, rape is" have been delivered to bars and clubs in the area known to be frequented by students. The campaign is a joint initiative between the Greater Manchester Police and Students Unions.

Detective Inspector Damian Simpson from GMP’s Serious Sexual Offences Unit. said: “Unfortunately we’ve dealt with many an incident whereby two young people have met on an alcohol-fuelled night out, one thing has led to another and the next morning we’re arresting somebody for rape.

“It doesn’t matter whether there has been flirting, kissing or you’ve exchanged numbers - sex without consent is rape, and if somebody is too drunk to consent then the best thing for all involved is to assume it has not been given.

“Rape ruins lives for both the victim and perpetrator and you have my absolute word that we will take each report seriously and are committed to bringing offenders to justice, whatever the circumstances may be.” 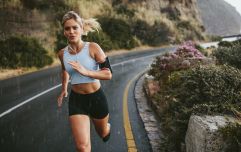 END_OF_DOCUMENT_TOKEN_TO_BE_REPLACED

Jess Lishak, Women’s Officer, University of Manchester Students’ Union said: “I’m really pleased to have been able to work with GMP to create this poster campaign tackling rape culture and the myths surrounding consent, aimed at perpetrators rather than victims. I’m so happy with the result and think it marks a really important change in the narratives around rape in our community.”

Fiza Ikram, President, University of Salford Students’ Union added: “We are proud to be included in this important campaign, standing alongside our student community to say that rape is never ok.

“We recognise that this campaign is one of first steps in our consent campaign aimed at all students, and encourage students to be respectful to one another, keep one another safe and think before they act.” 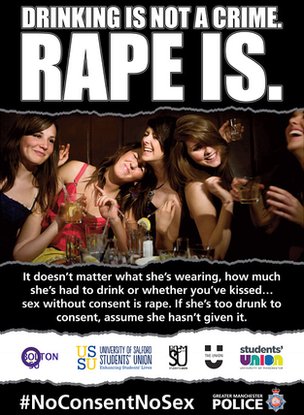 popular
Irish girls name was the most used Irish name in the United States last year
Ofcom receives 75 complaints over Jacques' treatment of Ekin-Su
Love Island: Danica sets her sights on Andrew as Luca asks Jacques about his relationship with Gemma
Prince William shouts at photographer who was "stalking" his family
Michael Owen hilariously responds to Love Island's heart rate challenge
Another of Gemma Owen's family could be headed for a reality show
Victoria Beckham recalls moment she was weighed on live TV
You may also like
3 weeks ago
Harvey Weinstein to be charged with indecent assault in London
3 weeks ago
Woman raped on beach in Goa after being offered a massage
1 year ago
Wayne Couzens pleads guilty to the kidnap and rape of Sarah Everard
1 year ago
Actor Armie Hammer accused of sexually assaulting woman
2 years ago
An estimated one in five reported rapes in Ireland are by a partner - why?
3 years ago
'Consent condom' requiring four hands to open criticised for missing the mark
Next Page