Pre-sale tickets for Ed Sheeran at Dublin's Croke Park went on sale this morning and a ghost of Croker past came back to haunt one individual trying to purchase tickets online.

Clare native, Aoife Taylor, was one of thousands of Sheeran fans that attempted to get their hands on the coveted tickets before they officially go on sale tomorrow morning.

What happened Aoife once she attempted to take her tickets through to checkout on Ticketmaster was a bitter reminder of a certain fiasco that surrounded the Irish stadium and a country music legend last year.

Aoife was asked to fill out a CAPTCHA (Completely Automated Public Turing test to tell Computers and Humans Apart) as a security procedure and the message that appeared on screen was pretty ironic. 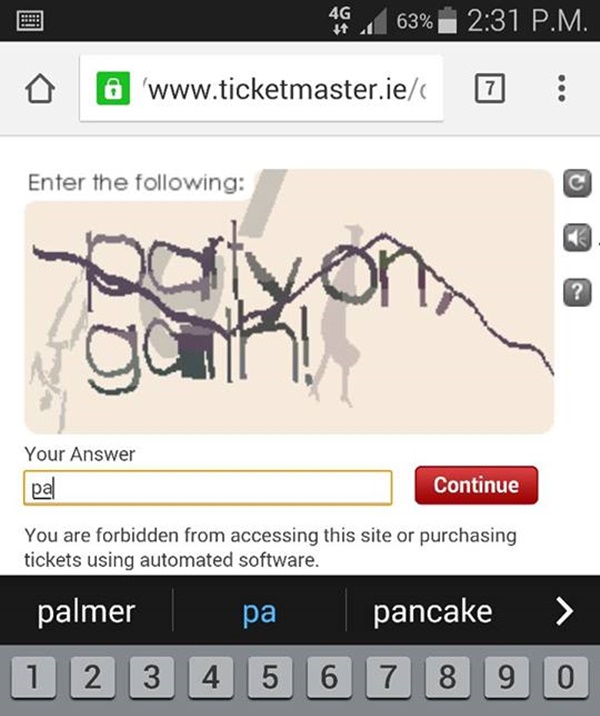 Aoife was asked to identify and submit the words... 'Party on Garth'.

We sincerely hope that is a Wayne's World movie reference and not someone playing with the music-loving-Croke-Park-attending-concert-goers across Ireland.

"The worst part," Aoife told our brothers over in JOE.ie, "I didn't get tickets and that just rubbed salt in the wound!"

popular
Horrifying CCTV footage shows woman being kidnapped by her boyfriend
Viewers left unimpressed after “ridiculous” Operation Transformation scene
Women are rinsing their hair in apple cider vinegar – and the results are amazing
Mark Labbett apologises after storming off The Chase set
Crystal Swing's Dervla calls for more supports for children with autism
Madeleine McCann suspect said to have multiple alibis for day she went missing
Vicky Phelan to be honoured in special ceremony next week
You may also like
4 months ago
Ed Sheeran announces concert at Croke Park
4 months ago
Ed Sheeran announces shows in Belfast, Limerick and Cork
7 months ago
Ed Sheeran reveals that he began Courteney Cox and Johnny McDaid's romance
1 year ago
Ed Sheeran is reportedly expecting a baby with wife Cherry Seaborn
1 year ago
Ed Sheeran donates £1 million to local charities amid #Covid-19 pandemic
2 years ago
Ed Sheeran is taking another break from music
Next Page