At their graduation ceremony most people just try to walk up onto the stage to collect their certificate without falling over or going red, but this guy went all out and tried a back flip.

The Davenport University student attempted the manoeuvre after he officially graduated and was making his way off the stage.

But something went wrong and he ended up landing in a way that, we’re guessing, was quite painful. Thankfully he got up and laughed it off. 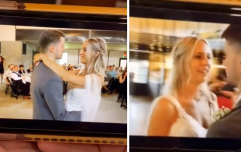 END_OF_DOCUMENT_TOKEN_TO_BE_REPLACED

The video has since gone viral and while we wouldn’t normally laugh at this sort of thing (because it was quite dangerous), it’s the reaction of everyone else which is priceless.

popular
Wagatha Christie: Rebekah Vardy storms out of court just 30 minutes into final day
Fashion house Dolce & Gabbana is 'sponsoring' Kourtney and Travis' Italian wedding
James Arthur says his relationship with this celeb made him a sex addict
Rebel Wilson claims male co-star sexually harrassed her
Why Are Men so Obsessed With Boobs? The Answer is Pretty Surprising...
'She was always in awe of celebrity' – Rebekah Vardy's ex-husband speaks out
Idris Elba and Sabrina Dhowre confirm they have welcomed a baby boy
You may also like
2 months ago
This TikTok is giving away all of McDonald's secrets
6 months ago
This Biscoff apple crumble is something you need to try this weekend
6 months ago
TikToker says he's the 'last man on earth' after fake claims
8 months ago
Woman horrified when man texts her after overhearing her say her number
8 months ago
IRFU and Leinster Rugby apologise over "unacceptable" women's changing facilities
8 months ago
Viral TikTok reveals what the Travelodge logo actually is and people are shook
Next Page