Footage released by police in the UK shows a lone woman fend off two robbers in broad daylight as people walk past, seemingly oblivious.

Camilla Rodwell was attempting to withdraw money from an ATM machine in Suffolk at around 10:45am on December 22nd, when would-be robbers approached her.

In the video, one man can be seen distracting Ms. Rodwell while another attempts to push buttons. 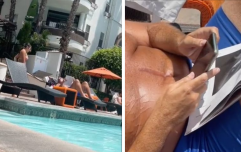 END_OF_DOCUMENT_TOKEN_TO_BE_REPLACED

Despite being pushed away, the two men persist until a passerby intervenes.

According to Breaking News, a spokesman for the Suffolk Police said:

“The victim pushed him back before another man then approached her at the other side and tried to take the cash and bank card but was also fended off, before a member of the public then intervened and the men walked away in the direction of Station Road.”

They have appealed for any information from the public, saying witnesses should contact Bury St Edmunds CID on 101 or Crimestoppers anonymously on 0800 555 111.

popular
Gardaí seize two cars linked to Ashling Murphy death as they question new suspect
A celebrity hairstylist just shared a genius hack for the perfect messy bun
What we can expect from Emily in Paris seasons 3 and 4
Penneys has a new homeware collection – and it looks so high-end
Zayn Malik has reportedly signed up for a dating app after Gigi Hadid split
Campaign to decommission Operation Transformation garners over 8,000 signatures
Here are all the Instagram accounts of the stars of Netflix's Cheer
You may also like
2 years ago
WATCH: Meet 88-year-old 'Paddy Christmas' who has become a local hero for his festive lights
2 years ago
WATCH: We tried eggnog for the first time and have some very important thoughts
2 years ago
WATCH: Kim Kardashian just proved she's the chocolate connoisseur of our generation
2 years ago
Ariana Grande gets permission to sample Kylie Jenner's 'Rise and Shine' lyric
2 years ago
A viral video on how to peel garlic in SECONDS has our minds blown
2 years ago
Hugh Jackman brought this Irish dad on stage last night and fans went WILD
Next Page