Writer Rosie Waterland has shared a candid, naked selfie in a bid to spread a message of self-worth.

The 28-year-old Sydney-based author and blogger shared the snap accompanied by a long message, the latest in a long list of women sharing raw photos in a bid to break down body stigmas.

Rosie revealed that she was growing ever more frustrated with women labelling themselves as "brave" because they aren't thin.

END_OF_DOCUMENT_TOKEN_TO_BE_REPLACED

In a post which has received more than 42K likes, Rosie explained:

"I've been reading/watching a lot lately about women in the public eye who are implicitly arguing that they're 'brave' for being a few kilos heavier than the average fashion model.

"Like, not being thin automatically makes them flawed, and therefore 'brave' for daring to live their lives in the public eye.

"What frustrates me about these women, is not that they're way thinner than me (and thus sort of implying that if they think they're some kind of fat yet successful miracle, then I must be a sea monster with no hope), but that despite their success, they still see weight as a major contributing factor to their value.

"This is my body. I have stretch marks. I have flabby skin. I have a belly. I have saggy boobs and I'm covered in freckles that made me cry when I was younger.

"But I'm also a best-selling author. A famous writer. An admired and funny woman. I'm touring a live one-woman show this year. I'm attending writing festivals with my heroes. I'm writing and starring in my own TV show.

"I don't look the way I'm 'supposed' to look, according to a select group of people. But I just don't give a f**k...I just think about writing the best, funniest s**t I can write. My body has nothing to do with that."

Alright. I can't believe I'm doing this but... I've been reading/watching a lot lately about women in the public eye who...

Facebook users flooded to offer their support for Rosie's message in the comments section.

However she did note that Instagram had removed her image as they felt it "violates" their community standards, although explicit images and videos under the hashtag "deep-throat" are deemed acceptable. 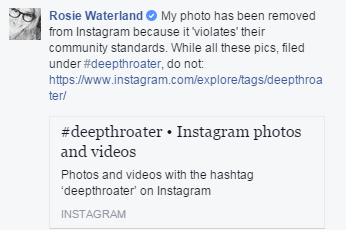 Meanwhile, other users questioned why the author would write a post about moving away from the realm of appearances and accompany it with a naked selfie.

popular
16 and Pregnant star Jordan Cashmyer dies aged 26
Gardaí seize two cars linked to Ashling Murphy death as they question new suspect
Here's where all the 149 tickets that won €36,687 in Saturday's Lotto were sold
A celebrity hairstylist just shared a genius hack for the perfect messy bun
Irish in Sydney shaken by Ashling Murphy murder
Dancing on Ice professional Sean Rice dies at 49
Louise Thompson cries "20 times a week" due to PTSD following birth of son Leo
You may also like
1 week ago
Rejoice - Instagram is bringing back the chronological news feed
1 month ago
Everything you need to know about Instagram's new 'take a break' feature
2 months ago
Who started the 'plant one tree for every pet picture' trend on Instagram?
2 months ago
Strictly microphones pick up gas audio from the contestants
2 months ago
Tilly Ramsay speaks out about body shaming after DJ calls her a "chubby little thing"
3 months ago
Influencer charged with drugs trafficking after trying to board Dubai flight with cocaine
Next Page