Look - admittedly it was all a bit last minute and we're sure that there were plenty of people with plenty of questions.

That and we're not used to extremes of weather on this island.

If you ever say something stupid in public just remember DCU once asked was it a college pic.twitter.com/DXDSaY9ova

Still, when the Department Of Education And Skills confirmed on Sunday that schools and colleges would be closed on Monday, October 16 due to the impending Storm Ophelia, one of our universities got a little confused.

If ever you feel clueless in any given situation in life just remember that DCU tweeted the Taoiseach asking if they were a college pic.twitter.com/HrBdJvUhF7

With An Taoiseach taking to Twitter himself to spread the word of a nationwide red warning, Dublin City University thought it would ask Mr Varadkar directly to expand on his message.

In a now deleted response (oh, sweet regret), DCU asked: "Can you please clarify what is meant by colleges and institutions?" adding: "Does this extended to third level institutions?"

And needless to say, Twitter pounced in the aftermath.

Some of us are waiting for to hear if we have to go to work tomorrow.

But DCU are having an existential crisis. pic.twitter.com/okTZbWsb4w

Sharing a screen-grab, one user - Aaron Harper - commented: "DCU may have deleted the tweet but we will never forget that they asked the Taoiseach if we are a college."

First year DCU student? There may still be time to send a change of mind form to the CAO... pic.twitter.com/APJ4anrO3z 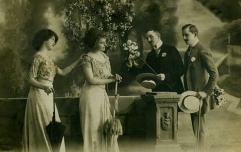 END_OF_DOCUMENT_TOKEN_TO_BE_REPLACED

Another, Jack Leahy, suggested drawing on the tweet if "ever you feel clueless in any given situation in life".

Somebody else - Kieran Gormley - offered: "If you ever say something stupid in public just remember DCU once asked was it a college."

Although the university hasn't commented on its role in breaking Twitter on Sunday evening, it dusted itself off to send out an email to staff and students detailing how the storm would impact on campus operations.

It also thanked everyone for their "patience". As you were, lads...

Thank you all for your patience!

Girls With Goals || Her · Ep.160: The Beauty Of Coaching - Hayley Harrison joins us from Sport Ireland
popular
Penneys shopping by appointment booking portal is now live
ASOS is selling moob tubes and we all know someone who'd wear one
Meghan and Harry share new photo of Archie to mark second birthday
First Dates Ireland's Mateo Saina welcomes baby boy with partner Vjerana
More footage of Tristan Thompson cheating on Khloe has emerged
"Irresponsible" Max Mara advert banned over "gaunt" model
Amy Adams and Patrick Dempsey land in Ireland for Enchanted sequel
You may also like
1 month ago
Chrissy Teigan quits Twitter following online negativity
1 month ago
Piers Morgan in Twitter spat with Jedward over Winston Churchill
3 months ago
Bebo, the greatest social network of all time, is returning to save us
4 months ago
"I'm Irish:" Ireland's most liked tweet this year was from Paul Mescal
1 year ago
ICYMI: Twitter wasn't prepared for Stanley Tucci's cocktail class and may never recover
1 year ago
Wondering how the Gavin & Stacey crew might cope in a lockdown? Twitter has you sorted
Next Page