'850 years of history taken down in 5 minutes': Outpouring of emotion as Notre Dame spire collapses

The world is looking on in horror this evening as Notre Dame in Paris continues to burn.

The iconic cathedral in the French capital caught alight earlier this afternoon.

Its spire collapsed after 7pm when flames burst through the roof. 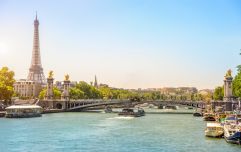 END_OF_DOCUMENT_TOKEN_TO_BE_REPLACED

A major firefighting operation is under way and the area has been evacuated.

Dropping water from helicopters to extinguish the blaze has been ruled out as the weight of the water would cause the entire building to collapse, according to France's civil defence and crisis management agency.

There are no reports of any casualties.

Crowds have gathered as the blaze ravaged the 850-year-old structure.

Reports say that the thousands of onlookers have begun to sing hymns.

There has been an emotional reaction to the fire online, with many sharing favourite memories of visiting the cathedral.

It took 200 years to be completely built.

Taken down in fire in a matter of 5 minutes

I'm spechless ... 900 years of history . Paris / France my heart is with you ??#NotreDame pic.twitter.com/pdQHfxOs29

Let's never forget the beauty that was #NotreDame, even if it is renovated after the flames are put out. ❤️❤️❤️ pic.twitter.com/JiEhfcT6JL

The world stands helpless as history disappears before our eyes. Devastating!!! #NotreDame pic.twitter.com/6mxCOXS9gP

so sad to see what happened in #NotreDame de Paris.
800 years of history is erased. pic.twitter.com/5N2iO7P8Ej

The landmark, which has made up part of the city's skyline for over 850 years, had been undergoing renovations.

The fire is believed to be related to this building work.

Girls With Goals || Her · Ep.161: Feeling Peachy - Sharon Keegan of Peachylean on being an absolute BOSS!
popular
Love Island featuring show's first contestant with a disability
Meghan was right to say Archie "won't be a prince" under Prince Charles
Opinion: It's your wedding, you can have an 'adults only' day if you want
Friends Star James Michael Tyler Files For Divorce
Friends actor James Michael Tyler battling Stage 4 cancer
Love Island winner Greg O'Shea explains why he's leaving "celebrity" life behind
Khloe Kardashian has JUST confirmed she is pregnant
You may also like
2 years ago
You are now able to zipline for free out of the Eiffel Tower
2 years ago
Five special places to visit next time you travel to Paris
2 years ago
Eiffel Tower evacuated after man spotted climbing up the side
2 years ago
Notre Dame Cathedral in Paris has been evacuated due to a fire
2 years ago
Our top 5 picks from Zendaya's Tommy Hilfiger collection
2 years ago
Several injuries have been reported following an explosion in Paris
Next Page