90-year-old grandfather comes out as gay in viral post and inspires millions!

Kenneth Felts has captured the hearts of millions worldwide.

Colorado native and nonagenarian, Kenneth Felts, has come out as gay in a viral Facebook post while looking for his long-lost love! In a true testament that it's never too late to live your authentic life, Kenneth revealed that the Covid-19 pandemic affected his decision to finally come out to the world.

The 90-year-old grandfather explained that during lockdown he began writing his memoir and he revealed that he couldn't complete it honestly without opening up about his sexuality.

As a child growing up in a strictly religious household in Kansas, Kenneth revealed that he felt unable to express his sexuality or pursue any such relationship. He explained the moment he first realised he was gay and having to hide it throughout his life:

In an interview with NBC's 3rd hour of Today, Kenneth revealed that he's proud to be gay and says he has never felt more free.

"I had been keeping this secret most of my life, and I had planned to take it to the grave". 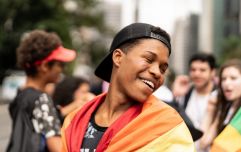 END_OF_DOCUMENT_TOKEN_TO_BE_REPLACED

In his original Facebook post, Kenneth spoke about his long-lost love, Phillip, and his wish to be reunited. Sadly, it was discovered that Phillip passed away a few years ago. Despite that, Kenneth says he's proud to finally be out, to be in a position where his story is inspiring other members of the LGBTQ+ family and that he finally feels "free".

popular
Yellow rainfall weather warning issued for seven counties
Aldi is selling a €20 coffee machine that's designed to "Brew and Go"
A new €1.3 million stargazing experience opens in Co. Tyrone next month
Someone has ranked the penis size of men from all over the world
Your guide to styling this autumn's staple knit, the dad vest
Kate Middleton has addressed the rumours that she's pregnant with her fourth child
'Beard-baiting' is now apparently a dating trend - and we're all for it
You may also like
2 months ago
'Extremely isolating': LGBTQ+ homeless community faces more challenges
3 months ago
Pride memories from Davina Devine: "I've probably done about twenty Pride parades"
3 months ago
93 percent of Irish LGBTI+ youth experiencing mental health issues during lockdown
3 months ago
10 books with LGBTQ+ themes to add to your reading list this Pride month
3 months ago
Paul Ryder reveals what's in store for Dublin's first Digital Pride parade
6 months ago
#Covid-19: Dublin Pride parade and festival postponed until September
Next Page