A baby seagull narrowly escaped with his life after the fire at a Primark store in Belfast yesterday.

The bird, aptly named Smokey, had been abandoned by his family a number of weeks back and was unable to fly due to a broken wing. 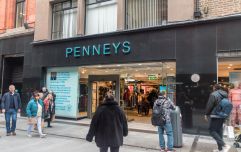 END_OF_DOCUMENT_TOKEN_TO_BE_REPLACED

He was living on a balcony at the Ann Summers store across from Primark on Castle Street in the city centre and was being cared for by staff there.

A team member from Debbie Doolittle's Wild Life, a local animal rescue group, was on the way to rescue Smokey when the fire broke out.

"When I arrived to get him there was an obvious danger!," they wrote on Facebook.

"I raced out onto the balcony to get it as he was fully exposed to the smoke and as he can't fly would have sadly choked to death as he had no shelter."

The rescuer manage to get to Smokey and get him to safety before the building was evacuated.

"The things you have to do! Just glad he's safe... if a little smelly."

The fire broke out on the top floor of the building at around 11am yesterday morning and spread quickly through the rest of the structure.

The Northern Ireland Fire and Rescue Service (NIFRS) sent 14 appliances and 80 firefighters to tackle the blaze.

The store had recently been refurbished.

popular
The most popular baby names in Ireland have been released in Statistical Yearbook 2021
You stars Victoria Pedretti and Dylan Arnold spark romance rumours
Police in US deny Brian Laundrie DNA rumours
Channel 4's Breastfeeding My Boyfriend doc criticised for contributing to stigma
Bake Off fans not able for Prue's innuendos last night
Apparently, THIS is the reason why Louise Redknapp split from Jamie Redknapp
TikTok star arrested and charged with murder of estranged wife
You may also like
2 weeks ago
Penneys is getting a Dryrobe dupe and it is a fraction of the price of a real one
3 weeks ago
Penneys launches 'posh' collection to help you build the perfect capsule wardrobe
1 month ago
Penneys has launched a major sustainability pledge – and here is what is changing in store
1 month ago
Penneys issues warning to customers as autumn/winter inventory delays expected
3 months ago
Primark offering Covid vaccines to shoppers this weekend in UK
4 months ago
Penneys new Pride collection drops this month - and we want it all
Next Page