It comes as prosecutors say they cannot rule out possible criminal charges against Alec.

Ireland Baldwin has spoken out in support of her father Alec following the accidental shooting of Halyna Hutchins last week.

Alec accidentally shot and killed the cinematographer on set of the upcoming Western movie Rust, which was filming in New Mexico. 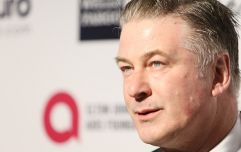 END_OF_DOCUMENT_TOKEN_TO_BE_REPLACED

Prosecutors have said it is too early to tell if criminal charges would be brought against the 63-year-old. Santa Fe district attorney Mary Carmack-Altwies said “all options are on the table at this point”.

Ireland took to Instagram to repost a screenshot of a comment from someone who had worked as an on-set rider for her dad in the 1990s. The person remembered how humble the actor was despite his Hollywood status, saying that his only request was for milk and cereal for his young daughter.

“Amongst some of the most abhorrent and threatening comments, emails, text messages, and voicemails I’ve been getting… this beautiful comment stands alone. I know my dad, you simply don’t. I love you, Dad," Ireland wrote.

The shooting that killed Halyna and injured director Joel Souza is currently being investigated. New details are emerging from the incident including confirmation the bullet that killed Hutchins has been found.

According to court documents, Alec was told the firearm was a "cold gun" when he started rehearsing a scene which involved him using the weapon. The term "cold gun" refers to a gun that does not contain live rounds.

There has been speculation about negligence on set, with claims the gun was not thoroughly checked.

During a press conference on Wednesday, Santa Fe County Sheriff Mendoza said there was “some complacency” on the set but it is yet to be determined who was responsible.

Prosecutors have said this case is complex and could take several months to complete.

popular
Women are rinsing their hair in apple cider vinegar – and the results are amazing
Toddler dies after being struck by vehicle in Co. Cork
Clubbers left "bleeding from their mouths" after accidentally drinking shots with caustic soda
New photo of Bernadette Connolly released as investigation continues
Gardaí find "no evidence" of needle spiking in Irish nightclubs
Worried about a loved one? Here are 5 signs of suicide to look out for
Actor Michael Madsen's son Hudson has passed away, aged 26
You may also like
1 month ago
Hilaria Baldwin says Alec "shushed" her when she was in labour
1 month ago
Alec Baldwin says he "didn't pull the trigger" in first interview since Halyna Hutchins' death
2 months ago
Alec Baldwin sued over shooting on Rust set
2 months ago
Man who handed Alec Baldwin loaded gun "shocked and saddened" by Halyna Hutchins death
3 months ago
Hilaria Baldwin pays tribute to Halyna Hutchins after accidental death
3 months ago
Alec Baldwin was told prop gun was safe before fatal shooting
Next Page