The author of The Handmaid's Tale - the book and latterly TV series in which women and are persecuted - has compared anti-abortion laws to a "form of slavery".

Margaret Atwood was speaking at a book conference in New York when during a Q&A session a man addressed the issue of reproduction rights - highlighting that it's "virtually impossible for a woman to get an abortion in the state of Texas". And the 77-year-old Canadian was emphatic in her response, saying that anti-abortion legislation leaves women dead and children orphaned.

She continued: "Who is going to pay for the orphans and the dead women? Because that's what you're going to have. And I'm waiting for the first lawsuit. I'm waiting, you know, in which the family of the dead woman sues."

Ms Atwood furthermore explained: "And I'm also waiting for a lawsuit that says if you force me to have children I cannot afford, you should pay for the whole process. They should pay for my prenatal care. 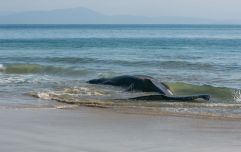 END_OF_DOCUMENT_TOKEN_TO_BE_REPLACED

She added: "It is really a form of slavery to force women to have children that they cannot afford and then to say that they have to raise them."

Margaret went on to state: "If you're drafted into the army, the other situation in which the state seizes control of your body, at least you get three meals a day, clothing, and a place to sleep. So, if you're going to do that to women, pay up."

In the dystopian The Handmaid's Tale the fictional authoritarian regime of Gilead forces women bear the burden of society’s fertility issues, while male infertility is either ignored or dealt with in secrecy.

popular
10 Dublin restaurants with outdoor areas we'll be hitting up for the next 3 weeks
Tried and tested: 3 sheet masks that seriously impressed me
WATCH: Simone Biles just did a triple backflip, a move not even recognised in women's gymnastics
The Christmas movies TV channel is launching this week
WATCH: Netflix to release documentary on the Watts family murder
Netflix shares trailer for fascinating David Attenborough documentary
'Forever my lobster' Gogglebox Ireland's Dawn and Dale announce their engagement
You may also like
1 day ago
Jackie Stallone: Celebrity Big Brother star and Sly's mother dies aged 98
2 days ago
"I was petrified and wanted a hand to hold:" Irish women call for the ease of maternity restrictions
2 days ago
Micheál Martin says "more influencers" needed to reach young people about Covid dangers
5 days ago
"Many will be upset..." Dublin to move to Level 3 from midnight, Taoiseach confirms
5 days ago
It'll take Ireland 55 years to bridge the gender pay gap
5 days ago
Netflix's Cheer star Jerry Harris arrested on child sex images charge
Next Page