Too cute to handle.

The baby is now four months old, but the zoo was reluctant to announce the news as it took them a while to determine his gender as his mum Kamili held in tightly for the first few months of his life. 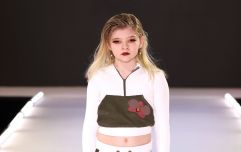 END_OF_DOCUMENT_TOKEN_TO_BE_REPLACED

While she is still keeping him close, the baby gorilla is nearly at the stage of crawling and exploring.

Western lowland gorillas are critically endangered in the wild, with it estimated that there are less than 100,000 left in the wild.

The zoo has now reached out for the public's help choosing a name for the baby, with a shortlist of eight names being created by the zookeeping team.

END_OF_DOCUMENT_TOKEN_TO_BE_REPLACED

Among the names, there are traditional African names like Raza, which means hope, and Bahati, meaning noble. Along with these, Kenneth has made the bill after Belfast born actor and director Kenneth Branagh.

"The newest additional to our gorilla family is growing really well. He's very healthy and strong and is getting the best care from Kamili, who is a fantastic, experienced mother," said Belfast Zoo Curator Julie Mansell.

"Now that he is four months old, he is increasingly alert and is showing more interest in food and playing with the rest of the family troop. Over the next couple of months, he will be learning to eat, walk and climb, which is a joy to watch."

Belfast Zoo is part of an international breeding and conservation programme for this species of monkey.

popular
Green Party representative calls for a temporary ban of stag and hen parties in Ireland
10 year old trans model becomes youngest to walk in New York Fashion Week
Greg O'Shea actually left Love Island to go to his granny's funeral
Scarlett Moffatt slams 'disgusting' pap for sneaking into hotel to take photos of her
It seems Helen Skelton has accidentally given away who her Strictly partner is
Pop Idol's Darius Campbell Danesh has passed away, aged 41
Ryanair, easyJet and BA issue warning to anyone boarding with smart bag
You may also like
2 years ago
Ronan and Storm Keating have welcomed their second baby – and her name is the cutest
2 years ago
"So thankful!" Lauren Conrad shares first picture of her new baby boy in honour of Thanksgiving
4 years ago
Christina Perri has announced the birth of her first child
4 years ago
Mindy Kaling has welcomed her first child
5 years ago
Liam Payne speaks out about fatherhood for the first time
5 years ago
Is your baby crying for no apparent reason? You should ALWAYS check this
Next Page