Approximately 600,000 people are affected by the notice.

A boil water notice has been issued for parts of Dublin, Meath, and Kildare.

Irish Water has issued the warning for homes and businesses in the vicinity of the Leixlip Water Treatment Plant. The entire water supply has been affected.

Issues with the water treatment process led to the notice last night.

Irish Water have said that these issues have since been resolved, but the boil water notice will remain in place for a few days as water continues to travel through the system.

"We would like to reassure our customers that that Irish Water's drinking water and operational experts are working with our colleagues in Fingal County Council to resolve this issue as quickly as possible," they said.

In this instance, water must be boiled and cooled before drinking, brushing teeth, gargling, preparation of food, making ice, and drinking filtered water.

According to the Irish Water website, a boiled water notice is usually issued when routine testing of the drinking water supply has shown the presence of harmful bacteria (such as E. coli), or pathogens such as Cryptosporidium. 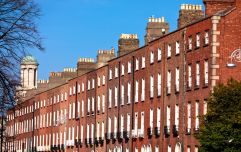 END_OF_DOCUMENT_TOKEN_TO_BE_REPLACED

A notice can also be issued "where there is a risk of contamination but where test results are yet to be confirmed."

"An example might include where the disinfection system has failed, or where a pollution event has occurred in the vicinity of the source water."

The affected areas are:

popular
People are freaking out thinking that their star signs have changed
QUIZ: Can you guess the TV series from the intro lyrics?
Will Smith admits to 'failing miserably' in 21-year marriage to Jada Pinkett Smith
The trailer for The Deceived has dropped, the new thriller starring Paul Mescal
Someone has ranked the penis size of men from all over the world
Irish short film 'How To Fall In Love In A Pandemic' long-listed for Oscars 2021
Kate Middleton has addressed the rumours that she's pregnant with her fourth child
You may also like
6 days ago
Tom Hanks says that he doesn't have "much respect" for people who don't wear masks
6 days ago
H&M to close 170 stores this year due to dropping sales
1 week ago
Aldi donating non-surplus food to food hub service during Covid-19
1 week ago
Dr Tony Holohan to be granted Freedom of the City of Dublin
1 week ago
International travel restrictions due to Covid-19 are expected to be extended until July 20
1 week ago
Stay or go? Here's what the experts are saying about travelling abroad this summer
Next Page