Calls for mandatory mask-wearing to return on public transport

As hospitals get busier, there have been calls for mandatory mask-wearing on public transport.

Amid rising Covid-19 numbers, there have been some calls for the return of mandatory face-coverings on public transport.

Tom O'Connor, who is the assistant general secretary of the National Bus and Rail Union spoke to RTÉ radio’s Morning Ireland about how the union is calling for a return to wearing face masks for all passengers.

END_OF_DOCUMENT_TOKEN_TO_BE_REPLACED

He pointed to the rising case numbers, and highlighted how just 20% of commuters are still wearing face masks.

Mr O'Connor also pointed out the importance of ventilation on public transport, and he said that the windows on trains and intercity coaches cannot be opened.

There has been a 29% rise in Covid-19 patients in hospital, and, as of last night, there were 1,388 patients in Irish hospitals.

Also on the morning's Morning Ireland was the HSE's chief operation officer Anne O’Connor, who said that hospitals will have to cancel elective procedures amid the surge. 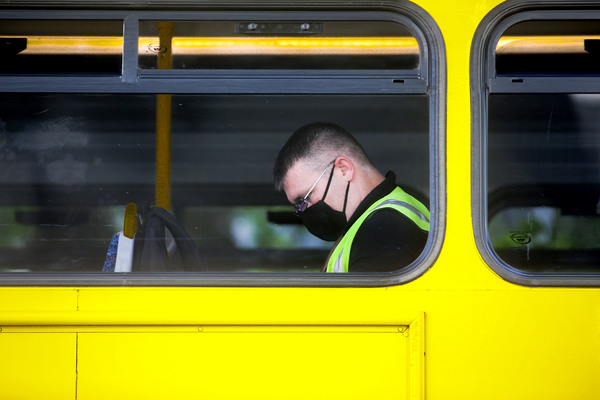 END_OF_DOCUMENT_TOKEN_TO_BE_REPLACED

Ms O'Connor described these cancellations as "the last resort".

She also pointed to the high level of absences in the service due to Covid.

END_OF_DOCUMENT_TOKEN_TO_BE_REPLACED

On the programme, she said: "This really is a capacity challenge. It is a real concern for us today.

"We have to get through the next few weeks and hope that the numbers improve."

She later said of the cancellations: "It’s the last resort for us. It has been one serious situation after another, none of us wants to cancel procedures.

"We will do everything to get back to full service."

Concerns about rising case numbers come as An Tánaiste Leo Varadkar revealed that the Chief Medical Officer does not recommend further restrictions.

At a party meeting, he pointed to the less severe nature of the Omicron variant as well as the high vaccination rates in Ireland.

popular
Here are the baby name trends set to dominate 2023
A breakdown of what exactly is going on with Ned from The Try Guys
Love Island's Faye Winter says she feels like she's "failing" as an influencer
Five children rescued from van as driver is arrested
Love Island's Adam Collard and Paige Thorne are "on a break"
Selena Gomez calls out "vile and disgusting comments" following Hailey Bieber interview
The beginner's guide to upcycling: 3 essential tips for embracing DIY at home
You may also like
3 months ago
TOWIE cast kicked off flight for refusing to wear masks
5 months ago
Health Minister announces new Covid booster vaccine recommendations
7 months ago
Australia to reopen to tourists later this month
8 months ago
Dáithí Ó Sé to be replaced on Today Show after contracting Covid
8 months ago
New EU travel rules on booster shot to come into effect tomorrow
8 months ago
Claire Byrne viewers confused about 'Covid time capsule' segment
Next Page