"That is what frightens me about motor neurone..."

Charlie Bird has opened up about losing his voice to Motor Neurone disease, saying he fears it will rob him of his “humanity”.

It comes as an emotional feature-length documentary is set to air on RTE on Monday night, following his life since his diagnosis in 2021.

END_OF_DOCUMENT_TOKEN_TO_BE_REPLACED

Viewers will see the former journalist speaking with his new voice, through the technology of an app which uses the archived broadcast audio created during his time spent working on RTE.

"That is what frightens me about motor neurone, I’m losing my humanity," he said. “But now if I have no voice I still have a little way of communication [with the voice app]."

In the documentary, Charlie relives the highlights of his career, as well as the early days of his illness, and talks about the pain he feels knowing he will have to leave his wife behind.

“I remember the very moment when I felt that there was something seriously wrong.

END_OF_DOCUMENT_TOKEN_TO_BE_REPLACED

“I felt all my arms shaking and twitching, at that stage I’d no definite diagnosis of Motor Neurone and then four weeks later, bang, it came.”

He described his shock the moment he read a letter his consultant wrote for his GP which said “Charlie Bird has a terminal illness”.

"People have said to me ‘you’ve been so brave in your journalistic career’, but I’m being honest, I haven’t been very brave in this fight.

“I feel sorry for my wife Claire, I want to put my arms around her and protect her and make sure that whatever road she travels she’ll be okay. 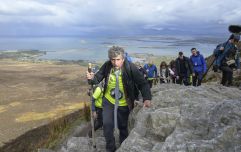 END_OF_DOCUMENT_TOKEN_TO_BE_REPLACED

“That makes me so upset that I’ll be leaving this relationship.”

Claire revealed that herself and Charlie try to stay positive, but both have their “dark days”.

Claire said: “He is emotional when he is here and it’s just the two of us. You can get caught up in your own thoughts. It’s overwhelming, it’s not about dying, it’s about how you’re going to die.”

Charlie Bird: Loud and Clear will premiere on Monday 13 June at 9.35pm on RTE One and RTE player.

popular
Primark reintroduces female-only fitting rooms after two men walk in on woman
Anna Delvey is set to be released from prison
Davide Sanclimenti opens up on having kids with Ekin-Su Cülcüloğlu as he turns down Dancing On Ice
Hilary Swank, 48, reveals she is pregnant, expecting twins
People are being warned not to dress as Jeffrey Dahmer for Halloween
I’m A Celebrity bosses ‘sign first Love Island contestant for 2022 series’
Woman tells Kate Middleton 'Ireland belongs to the Irish' during Belfast visit
You may also like
4 weeks ago
Charlie Bird thanks those who comforted him after breaking down in Dunnes Stores
3 months ago
Vicky Phelan shares message of support with Charlie Bird as she deals with pain
3 months ago
RTE viewers left "in tears" after emotional Charlie Bird documentary
4 months ago
Charlie Bird has shared his bucket list as he hopes to see Bruce Springsteen next year
4 months ago
Charlie Bird "blown away" by people's kindness as his charity campaign raises over €3 million
4 months ago
Charlie Bird gives video update of his condition getting "progressively worse"
Next Page