From one to millions: Greta Thunberg's climate strike made waves in Dublin city centre today

It all started with "FridaysForFuture."

The grassroots movement that saw hundreds, then thousands, then hundreds of thousands of students from all around the world skip school in protest of climate change.

Students from 100 or so countries around the world took to the street to protest for cleaner energy, for climate refugees, and against the continued use of fossil fuels.

Four years later and the movement has grown exponentially, amassed crowds from over 2,000 cities, and made striking for change the norm.

FridaysForFuture have since become EveryDaysForFuture thanks to Greta Thunberg, the 16-year-old Swedish activist who popularised the term last year when she went on strike outside the Swedish parliament bearing a sign reading: "School strike for the climate."

This year alone there have been three major school strikes for climate awareness. Today, there was another one - and it may just have been the biggest yet.

Today, thousands of students in Ireland took the streets in Dublin, Cork, Limerick, and Galway to protest the government's lack of movement on the worldwide issue.

Similar protests and walkouts had also been organised in 50 other towns and cities across the country, with many schools and universities (not including Dublin's Blackrock College) encouraging their students to skip class and strike for change. 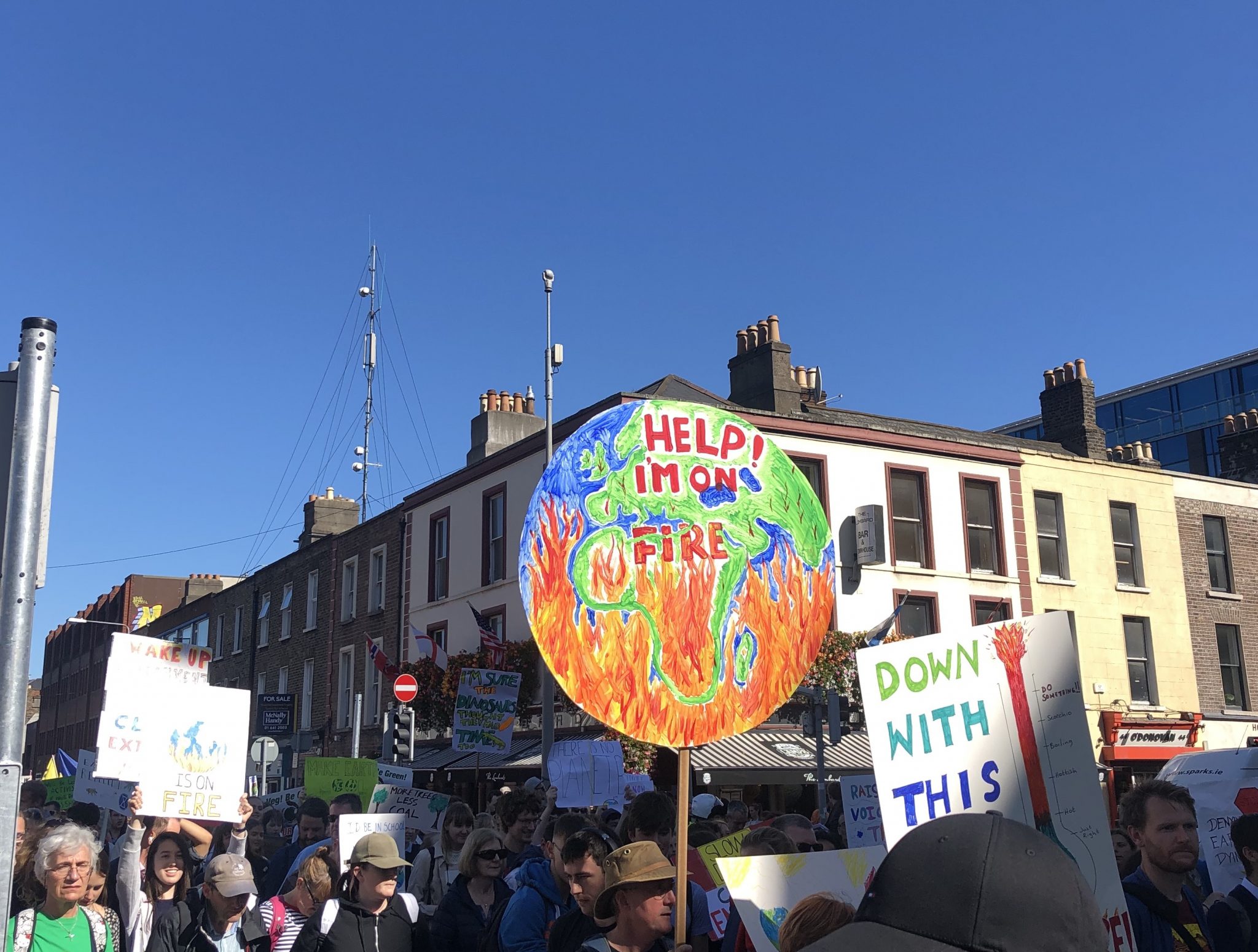 END_OF_DOCUMENT_TOKEN_TO_BE_REPLACED

The Dublin demonstration kicked off at noon today and by half 12 the thousands of primary school students, teenagers, and adults supporting them were making their way towards Leinster House, armed with clever signs and voices loud enough to shout over the busy city centre traffic.

"There's no planet B," boast the banners. They depict cartoon planet Earths on fire, sea levels rising, and the very real warning that we've been far too inactive for far too long.

There's something cruel and oddly uplifting about seeing children in school tracksuits, those who couldn't possibly be older than seven or eight, chanting about rising sea levels and global warming.

They shouldn't have to do it. But they do, and they are.

A considerable turnout had been expected for today's strike. A considerably higher number of people actually showed up.

END_OF_DOCUMENT_TOKEN_TO_BE_REPLACED

A few months back, Ireland became one of the first countries in the world to declare a climate emergency.

Along with the UK, our government decided to officially recognise that the world is in trouble, and that we now must take real and necessary steps to ensure that the next generation actually have a world left worth living in.

But simply admitting that something is wrong is not enough - especially not when the UN has given us just 12 years to limit a climate change catastrophe.

Today's strike wasn't the first time Irish students took to the streets in protest of our lack of action around the ever-present climate issue - and it certainly won't be the last either.

It's just like the signs say: "Sea levels are rising - and so are we."

popular
Paul Mescal wore O'Neill's shorts while carrying cans of pink gin so I bought O'Neill's shorts and cans of pink gin
This amazing hanging egg chair is coming into Aldi next week and go, go go (but safely)!
Here's how to keep your dog safe and sound during the hot weather
After days of silence, Scott and Sofia finally comment on the break up rumours
5 reasons why we need more videos of Doireann Garrihy's new puppy immediately
Lidl is launching a new hyaluronic skincare range and the serum is only €3.49
PSA: White Claw Hard Seltzer is launching in Ireland next month
You may also like
7 hours ago
Women and girls struggling with access to period products during #Covid-19, research shows
2 days ago
Thursday set to be the hottest day of the year, says Met Éireann
2 days ago
Two years since Repealing the Eighth, Ireland shares its #RepealMemories
3 days ago
Irish Hairdressers Federation to propose guidelines for early reopening of salons
5 days ago
#UpBeat: 5 good things that happened this week
6 days ago
5 years since Marriage Equality: 5 things we still need to achieve
Next Page