Video from inside the courtroom details ALL of Conor McGregor's charges

Conor McGregor was advised to be on his best behaviour as his bail was set at a court hearing on Friday afternoon.

McGregor was granted bail of $50,000 and learned that he would be free to return to Ireland following his rampage through Barclays Centre the previous day.

By now, we've all seen the footage of the chairs, guard rails and hand trucks that were sent crashing into the bus which held Khabib Nurmagomedov, the fighter targeted by McGregor's posse.

Michael Chiesa and Ray Borg both picked up injuries in the incident and neither will be allowed to compete at UFC 223 on Saturday night.

He turned himself into authorities late on Thursday night https://t.co/aBmXep6rcj

McGregor turned himself into New York Police Department's 78th precinct late on Thursday, where he was charged with three counts of assault and one count of criminal mischief. 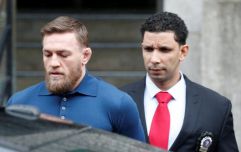 END_OF_DOCUMENT_TOKEN_TO_BE_REPLACED

The Irish UFC star sat in a Brooklyn courthouse on Friday afternoon alongside teammate Cian Cowley, who is charged with one count of misdemeanor assault and one count of criminal mischief.

It was during Friday's hearing that the full details of McGregor's accusations were disclosed.

The allegations were read out as follows: 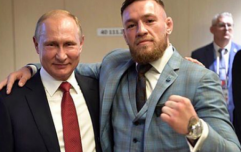 END_OF_DOCUMENT_TOKEN_TO_BE_REPLACED

"This case occurs at a loading dock at the Barclays Centre. The complainants appear to be on a bus. The defendants, along with several individuals, appear on the loading dock.

"As for defendant McGregor, he is captured on video surveillance picking up a chair and throwing it through a passenger window of that bus, causing injuries to several individuals inside the bus.

"I would note, judge, that the two individuals in the bus who sustained injuries sustained bruising and swelling to the cheek, corneal abrasion and were treated and released at Brooklyn Methodist Hospital.

"The second complainant who was injured in regards to the defendant throwing the chair, he sustained bruising to the face, laceration to the nose, ear and forehead. He was also treated and released at Brooklyn Methodist Hospital. Photographs were taken of the complainant's injuries.

"Defendant McGregor also throws a punch at someone who was on security detail. He throws a punch, striking that individual. That individual also sustained injuries - pain, swelling and bruising. He was also treated at Brooklyn Methodist Hospital."

McGregor and Cowley left the courthouse and jumped in cars. They are gone. Next hearing is 6/14/08.

popular
Love Island’s Afia explains why Gemma’s dad has not been mentioned on show
Buying fake designer goods abroad this summer can have some serious consequences
Love Island's Remi says arguments with Jacques "ruined" his time on the show
Love Island fans react to "confusing" recoupling
Shaughna Phillips brands Love Island heart rate challenge "fixed" and "vile"
WIN: VIP experiences at Marlay Park and more of this summer's hottest gigs and festivals with Heineken
Primark is trialling online orders for the first time ever
You may also like
3 years ago
'My babies' Dee Devlin shares first picture of daughter Croia with Conor Jr
3 years ago
Conor McGregor has announced his retirement from MMA
3 years ago
McGregor family spend the night in Versace's mansion to celebrate mum's 60th birthday
3 years ago
Dee Devlin shares photo for the first time since giving birth to her second child
3 years ago
Apparently, this is the unique name Conor McGregor and Dee Devlin gave their second child
3 years ago
Conor McGregor and Dee Devlin have welcomed their second child
Next Page