"By 6am this morning, queue times under 10 minutes were being experienced by early morning travellers in both terminal one and two."

The Dublin Airport Authority (daa) has said that departures are operating "very efficiently" this morning.

As RTÉ reports, the maximum number of security lanes are open, extra staff are working and there is an "improvement in queue management for passengers entering the terminals for check-in, bag drop and security."

END_OF_DOCUMENT_TOKEN_TO_BE_REPLACED

Kevin Cullinane, who is the head of communications for daa gave an update on the airport situation this morning.

Mr Cullinane said: "By 6am this morning, queue times under 10 minutes were being experienced by early morning travellers in both terminal one and two.

"Today is the start of a very busy bank holiday weekend of air travel with up to 50,000 passengers a day departing from Dublin Airport." 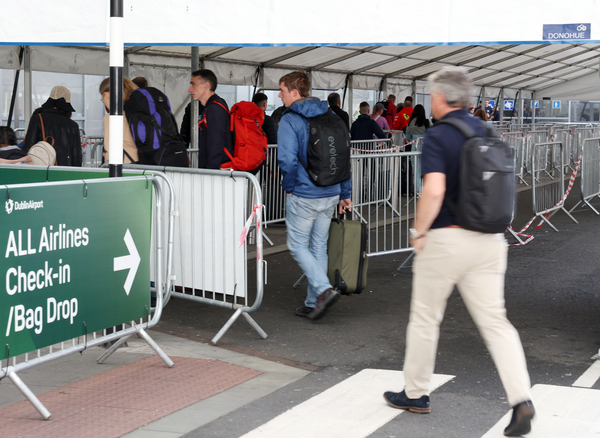 END_OF_DOCUMENT_TOKEN_TO_BE_REPLACED

Over the past week, the daa has implemented a new strategy to manage queues after over 1,000 passengers missed their flights due to significant queueing. They have hired 40 extra security screening staff this weekend and they have deployed some staff from Cork Airport, which is also operated by daa.

Additionally, marquees have been erected outside the terminal building, so if the queues need to move outside passengers will be sheltered if it rains.

END_OF_DOCUMENT_TOKEN_TO_BE_REPLACED

The airport is set to be very busy this Bank Holiday Weeekend, and 49,000 passengers are expected to depart from Dublin Airport today.

Yesterday, Graeme McQueen, the daa's Media Relations Manager, said that he hopes passengers will feel "at ease" this weekend, while acknowledging that management "fell down" last week.

Speaking on RTÉ's Morning Ireland, he said that the group continues to work on ways to get people through the airport in an "orderly manner".

popular
Irish girls name was the most used Irish name in the United States last year
Prince William shouts at photographer who was "stalking" his family
Michael Owen hilariously responds to Love Island's heart rate challenge
Love Island: Danica sets her sights on Andrew as Luca asks Jacques about his relationship with Gemma
Victoria Beckham recalls moment she was weighed on live TV
Ofcom receives 75 complaints over Jacques' treatment of Ekin-Su
Another of Gemma Owen's family could be headed for a reality show
You may also like
3 days ago
Charlie Bird releases photo book to commemorate the Climb With Charlie fundraiser
4 days ago
Oslo Pride events cancelled after two killed in Norway shooting
4 days ago
Disney and Netflix among US companies announcing they'll cover employees abortion travel costs
1 week ago
Fundraiser launched for toddler left severely injured in car accident
1 week ago
Severe weather warning issued as Spanish heatwave continues
3 weeks ago
No flights missed due to queues this weekend, Dublin Airport claims
Next Page