Disappearing Messages: Facebook’s New Feature Is A Lot Like Snapchat

Social networking sites are constantly trying to beat each other in terms of innovation and this latest development sees Facebook imitating Snapchat’s disappearing message function.

The company are testing out a new feature which can destroy messages an hour after they are sent. The Independent reports:

'If the feature is available, users will see a small egg-timer pop up in the top-right of their messages, next to the information button. Pressing that turns it on, and will mean that anything that gets sent will self-destruct, then it can be turned back off in the same way.' 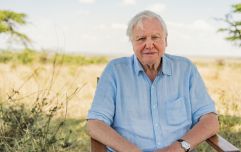 END_OF_DOCUMENT_TOKEN_TO_BE_REPLACED

With over 100 million users according to Fortune, Snapchat is becoming one of the most powerful forces in social media so it’s no wonder Facebook are trying to introduce this new feature.

So far, the company seem to be testing it in France only, but it could be rolled out if it performs well.

We think they would be better off getting rid of that pesky blue thumb.

Girls With Goals || Her · Ep.160: The Beauty Of Coaching - Hayley Harrison joins us from Sport Ireland
popular
TikTok Trend: What is laundry stripping and does it work?
M&S just launched the designer collaboration of dreams – with the ONE dress everyone needs
Zoos, heritage parks, & nature walks: Here's what's opening on April 26
Jennifer Aniston is reportedly pregnant with her first baby
Kate Middleton has addressed the rumours that she's pregnant with her fourth child
Starbucks has a bubblegum-flavoured frappuccino on their menu – but you need to hurry
So, William and Harry have a step sister... and who knew?
You may also like
4 days ago
Instagram v reality: Why are we so fascinated by "normal" photos of celebrities?
3 weeks ago
Woman goes viral on TikTok after posting picture of wine glass without noticing reflection
3 weeks ago
Laura Whitmore replies to "disgusting" Instagram DM, urges people to "think before they send"
1 month ago
Instagram bans adults from messaging users who are under 18
2 months ago
Bebo, the greatest social network of all time, is returning to save us
5 months ago
3 things I've done to make my Instagram feed better for my head
Next Page