The hunger strike began after 10am on Monday morning.

Tim Jackson, an independent politician from Donegal, has begun a hunger strike outside the Dáil in an anti-abortion protest.

Jackson says that he will drink only water, and that the hunger strike will 'go on for as long as is necessary', but he will not let it go as far as death.

He posted a Facebook Live stream outside the Dáil after 10am on Monday morning, saying:

"I've got my white flag which is really a message to the politicians that they have to end this killing of the unborn, not going any further with it, stop the war on the unborn." 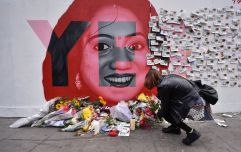 END_OF_DOCUMENT_TOKEN_TO_BE_REPLACED

Jackson states that abortion is something that shouldn't be tolerated, and that before the 8th referendum is taken any further, he wishes for politicians to watch a video of an abortion taking place.

He asks for people to join him, whether to wish to support him or argue with his viewpoint:

"You're welcome to come down to the Dáil at any point and sit here with me, it'd be great to have a bit of company."

popular
He may be a politician, but Leo Varadkar's personal life is none of our business
Fans are feeling seriously sorry for Molly Mae Hague after resurfaced interview
Kelsey Parker: "People think I should be walking around wearing my black veil"
"I slept with your fella": Vogue speaks out about ex's cheating
Parents told to stop buying selection boxes for kids- here's why
Woman hit by rollercoaster wakes from coma after two months
Dundalk restaurant offer free Christmas dinner to those in need for third year running
You may also like
2 weeks ago
Calls to remove 'inhumane' 12-week limit on abortion services in Ireland
1 month ago
Savita Halappanavar march: How far have abortion rights in Ireland really come?
2 months ago
Chrissy Teigen reveals her miscarriage was actually "an abortion to save my life"
4 months ago
Woman bled for days after being denied treatment for incomplete miscarriage
4 months ago
Woman asked if she had an abortion before being deported from the US
5 months ago
Prue Leith responds to her son's comments about abortion
Next Page