It will tug at your heartstrings.

Judge Judy reunited a dog with his owner in a heartwarming moment on the show.

The 2012 clip, which has recently resurfaced online, has gotten nearly 5 million views in just three days.

And it's easy to see why.

Judge Judy had reached her breaking point over the pet ownership case - with each side claiming they were the owner of a little dog named Baby Boy.

According to People, the woman who has Baby Boy insist she bought him legally from someone selling him on the street.

Meanwhile, the other individual says that he was Baby Boy's real owner before the sale - and that the pooch was taken from him and sold to the dog's current owner without his knowledge.

But rather than letting the humans make the final decision, Judge Judy decided to let Baby Boy resolve the canine conundrum. 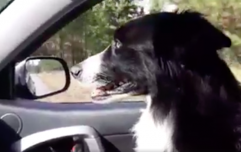 END_OF_DOCUMENT_TOKEN_TO_BE_REPLACED

She has the dog carried into the courtroom, and says: "Put the dog down."

The small pooch goes sprinting to the other side of the courtroom and begins to jump excitedly at his original owner's feet, wagging his tail.

And that's all that Judge Judy needed to see. Within seconds of Baby Boy reaching his owner, she made her final ruling.


popular
David Beckham shared his dinner on social media and we really wish he hadn't
10 summmer dresses we are ordering this week to cheer ourselves up
19 brilliant books to read while you're social distancing
Nikon is offering free online photography classes for the month of April
Disney Plus announces new titles coming in April
5 new additions to Netflix to spend your weekend watching
Dad hides coronavirus symptoms from hospital staff in order to see newborn
You may also like
1 week ago
You can buy a painted planter of your dog's face so Monday is already ten times better
2 months ago
Bad news klaxon! Kissing your pet on the mouth may be damaging your health
2 months ago
This is how you can get a puppuccino for your dog at any Starbucks cafe
3 months ago
Why being patient and allowing for sniffs means the world to your dog
3 months ago
Bella and Simba - These are the dog names most likely to trend in 2020
3 months ago
Dogs dream about their owners in their sleep and we're completely overjoyed
Next Page