A woman in the States is setting records after becoming the oldest person ever to fly to space. 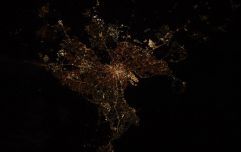 END_OF_DOCUMENT_TOKEN_TO_BE_REPLACED

Funk was originally denied heading off on a mission like this back in 1960s due to her gender, and now hopes to be an inspiration for other women across the world.

The pilot come astronaut is set to join Bezos on the flight which is set to launch to the edge of space today, leaving its base in Texas.

The pair will be joined by the Amazon billionaire's brother Mark Bezos and an 18 year old Dutch student Oliver Daemen, who is making history as the youngest person to go to space.

Funk was given her invite to the flight directly from Bezos himself and it's set to take only ten minutes to get there.

The flight will see the spacecraft head above the Earth's atmosphere and give the passangers a chance to leave their seats and float within the cabin before coming back to Earth and arriving in a Texas desert by parachute.

Funk is taking the title of oldest person in space from John Glenn, who flew on the Space Shuttle flight at the age of 77 back in 1998.

Funk took her first flying lesson when she was only nine years old, according to the Amelia Earhart Hanger Museum.

She then went on to get her full pilots license at only age 20 and at 21 she was part of the Mercury 13, the 13 women who had passed NASA's astronaut training in the 60s and witnessed the first ever flights to space in 1961 and 1963.

popular
The internet is saying the same thing after Ryan's Toy Show opening
Top 9 moments from the Toy Show we're still talking about
The Toy Show DJ brothers have been offered their very first gig
Vicky Phelan reveals how she's keeping up with her family Christmas traditions post treatment
Viewers in bits after Barry Humphries congratulates Dermot O'Leary on coming out
Four teenage boys arrested on suspicion of murdering 12-year-old girl in UK
We finally know what happened to Sam in And Just Like That
You may also like
6 months ago
Norah Patten: "There’s so much camaraderie in STEM courses between women"
2 years ago
Mysterious radio signals heard coming from a galaxy 1.5 billion light years away
3 years ago
NASA has launched its latest mission to Mars
3 years ago
Irish PR guru didn't shop for a year and says it changed her life
4 years ago
This astronaut just revealed what space smells like... and it's disgusting
4 years ago
Mayo woman set to become the first Irish person to go into space
Next Page