Six boys have now been rescued from the flooded Thailand cave

The fifth and sixth boys have been rescued from the flooded Thailand cave this morning.

Six of the 12 boys have now made their way out of the cave following a large-scale rescue operation led by 18 divers.

The boys, aged between 11 and 16, and their soccer coach became trapped in the Tham Luang cave complex on June 23. They were discovered alive by divers after nine days.

Local news reports that the fifth boy was brought out of the cave today and later transported to a hospital "on a stretcher" while the sixth boy was treated by medics at the field hospital.

The fifth rescued boy is believed to be inside of the helicopter.

A fifth boy has been rescued from the cave in Thailand

The boys are being led through the cave's narrow and flooded passages via rope by experienced divers from the UK, the US, China, and others. 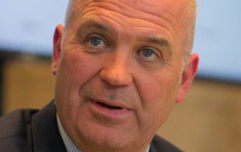 END_OF_DOCUMENT_TOKEN_TO_BE_REPLACED

Thai authorities stated that the rescued boys had not yet had physical contact with their families due to fears of infection caught in the cave.

It is believed that the boys' families have been communicating with them through a glass partition in the hospital.

After being discovered by the divers, many of the boys in the cave reported that they did not know how to swim or dive.

Authorities have confirmed that the four boys rescued previously are in "good health."

The rescue mission is ongoing.

popular
Chrissy Teigen and John Legend suffer pregnancy loss due to complications
Dr Tony Holohan to return to Chief Medical Officer role next week
Fact Not Fiction: Just how much do you know about vaginas and sexual health?
Aldi's pet event is back and yes, those are hooded parkas for dogs
Here's what happens on every day of your menstrual cycle (roughly)
Someone has ranked the penis size of men from all over the world
Here's what the lines on your hands say about you
You may also like
10 hours ago
"Turn those feelings into action" Michelle Obama shares plea following first US Presidential debate
1 day ago
10 percent of students affected by Leaving Cert grading errors
1 day ago
400 Welcomes: "Ireland can do better" in relocating refugees after Moria camp fire
2 days ago
Yellow rainfall weather warning issued for seven counties
3 days ago
What's going on with TikTok?
3 days ago
Debenhams workers occupy closed Waterford store
Next Page