The Jackson and Olding trial sparked a nationwide debate.

Arguments fell out from the verdict itself when all four men, Jackson, Olding, McIlroy and Harrison, were acquitted of all charges. Regardless of the not guilty decision though, the nature of some of the details revealed during the court case upset many.

Fears were expressed about the impact the trial would have on victims of sexual assault and whether they'd be more unlikely to come forward.

Then, further necessary discussions were had around consent.

Very, very few people in this country could honestly say that they haven't read or listened to anything on the trial or its fallout or that they haven't engaged in some form of conversation around that specific case and the wider topic.

“She was not present in the courtroom since she finished giving her evidence, but she was in the building every day, unseen, her presence announced by a ringing phone, a reminder to all - she was listening.”

This is the story I’ve been waiting to write.https://t.co/0gEzJrqXq6

END_OF_DOCUMENT_TOKEN_TO_BE_REPLACED

Since, the IRFU and Ulster said they were going to launch an internal review into the matter.

Neither player has played for their country or province this season and, after the trial, an ad ran in the Belfast Telegraph demanding that they never do again.

A crowd-funded ad has been placed in the Belfast Telegraph today calling for Paddy Jackson and Stuart Olding to never play for Ulster or Ireland again https://t.co/TjFSBC541D pic.twitter.com/AqrsbhUFTI

On Wednesday, a response came.

END_OF_DOCUMENT_TOKEN_TO_BE_REPLACED

The Belfast Telegraph ran a full-page ad in the paper from "real fans standing up for the Ulster men" and they were asking that both Jackson and Olding be reinstated into the club and given the opportunity to represent Ireland again.

"As Ulster and Irish rugby fans, we want these innocent men reinstated and rightly allowed to resume their roles for both club and country," the statement read in the paid ad.

It went on to take issue with the social media coverage which has condemned both players over the last number of months.

"What is reprehensible is the extent of the social media backlash aimed at incriminating men unanimously acquitted of any crime.

"The IRFU should take note of the silent majority and not bow to the court of social media."

Read the full statement below. 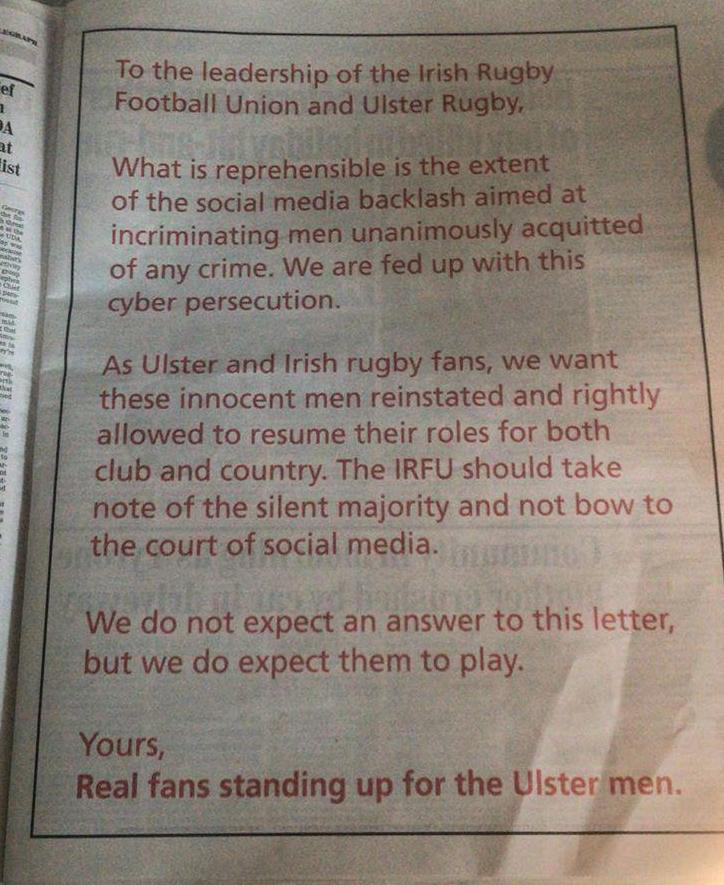 popular
Casper Walsh from Versatile got engaged this weekend, and the ring is INSANE
H&M to close 170 stores this year due to dropping sales
Glossier: A first-time buyers guide to this cult beauty brand
5 reasons why Limerick is an ideal staycation destination this summer
Here's what happens on every day of your menstrual cycle (roughly)
J.K. Rowling has signed an open letter calling for the end of cancel culture
Someone has ranked the penis size of men from all over the world
You may also like
1 day ago
Tom Hanks says that he doesn't have "much respect" for people who don't wear masks
1 day ago
H&M to close 170 stores this year due to dropping sales
2 days ago
Aldi donating non-surplus food to food hub service during Covid-19
6 days ago
Stay or go? Here's what the experts are saying about travelling abroad this summer
6 days ago
Tributes paid to Dr Tony Holohan as he steps back from role to care for wife
1 week ago
Harvey Weinstein victims to receive $19 million settlement
Next Page