Gender reveal party leads to yet another wildfire

This time it was in Canada.

Gender reveal parties have been gaining more and more popularity over the last few years, but it's not always good reasons when they hit the headlines.

Yet another gender reveal party has sparked a wildfire, but this time it's causing damage in Canada. 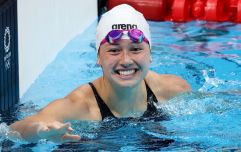 END_OF_DOCUMENT_TOKEN_TO_BE_REPLACED

Some type of explosive device was set off to reveal the baby's gender near Fort McMurray Forest Protection Area in Alberta, Canada on May 31, which caused the disaster.

Aiming to tell friends and family what the baby was going to be, the device had other plans and ignited a wildfire that spread about an acre.

Please use caution while working outdoors in the Forest Protection Area of Alberta! Friction or a spark caused by grinding or welding can easily ignite dry grass and become a wildfire. Always watch your surroundings and have water and firefighting equipment handy. #ABWildfire pic.twitter.com/9Q9LfjpiSt

A spokesperson for Alberta Wildlife Travis Fairweather has said that those responsible for setting off the device have since been issued a $600 fine and are being forced to pay for the cost of putting out the fire.

He said: "While fireworks and exploding targets can be fun, they can also come with a hefty price tag if you inadvertently start a wildfire."

The fire was initiated by a disc loaded with coloured powder, a popular way to reveal the gender, but this has caused damage over the last few years since it began.

A new baby is something to celebrate, but be careful how you do it! A recent wildfire in Alberta was caused by an exploding target during a gender reveal party. You need written permission from a Forest Officer before detonating any exploding targets. https://t.co/Mp9Q6yZU3a pic.twitter.com/3fQYtGO8c8 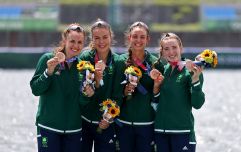 END_OF_DOCUMENT_TOKEN_TO_BE_REPLACED

The creator of gender reveals has since said they regret creating it due to the destruction and accidents some have been involved in.

Fairweather also noted that this was the third occurrence like this where an exploding device has caused a fire this year.

He added: "When you fire a round at them and it connects, it creates a small explosion. Especially in dry conditions, that initial explosion can create some heated debris … and when that hits the ground, it can simmer and certainly start a wildfire."

But with all this being said, Fairweather told the Edmonton Journal he didn't know what colour the explosion was - so we may never know the baby's gender.

Girls With Goals || Her · Ep.161: Feeling Peachy - Sharon Keegan of Peachylean on being an absolute BOSS!
popular
Love Island fans pine for Tommy Fury's loyalty after last night's episode
Charlie Haughey's grandniece has won big for Hong Kong in the Olympics
Love Island: The girls get a shock as the boys start grafting
Simone Biles pulls out of all-around Olympics final due to mental health
The sad reason why viral gymnast, Katelyn Ohashi, isn't on the USA Olympic team
Who says you have to wear a dress? We're looking at alternative fashion options ahead of Ladies Day at the Galway Races
Love Island's Georgia could tell Hugo had a thing for Chloe
You may also like
6 days ago
Couple charged with manslaughter after gender reveal party wildfire
10 months ago
Bindi Irwin and husband Chandler Powell are expecting a baby girl
2 years ago
Shay Mitchell and Matte Babel revealed their baby's gender in the craziest way possible
2 years ago
Did this detail from Meghan's baby shower give away the gender?
2 years ago
Boy or girl? These are the old wives' tales I found to be true during my pregnancies
2 years ago
Husband surprises wife with sweet gender reveal using her late dad's voice
Next Page