In a report commissioned by the World Economic Forum it was revealed that Ireland has placed 5th out of 145 countries surveyed in terms of wage equality between men and women.

The report stated that:

‘No country in the world has achieved gender equality. The highest ranked countries—Iceland, Norway, Finland, Sweden and Ireland —have closed over 80% of their gender gaps, while the lowest ranked country—Yemen—has closed a little less than half of its gender gap.’

END_OF_DOCUMENT_TOKEN_TO_BE_REPLACED

It was also noted in the report that women are now being paid the equivalent of what their male counterparts were being paid 10 years ago, essentially meaning women are a DECADE behind men in terms of how much cash they make for the same amount of work.

The report called for businesses to make more of a concerted effort to create changes in their companies that would lead to more women employed, in higher leadership positions, and a better work life balance particularly in terms of childcare and maternity leave.

‘Leaders need to take a holistic approach that often leads to fundamental reforms on how to recruit and retain employees; how to mentor and sponsor high-potential women; how to sensitize managers to different leadership styles; how to manage work-life balance policies so that they don’t disadvantage women.’

Shockingly, it's going to be another ONE HUNDRED AND EIGHTEEN YEARS until the gender gap is closed at the current rate we are going. 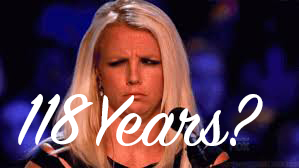 In some countries such as Iran, progress has stalled completely at 58%, the same figure as 2006. Croatia, Sri Lanka and Mali have also shown disappointing figures.

You can read the full report here:

Girls With Goals || Her · Ep.153: Scholarship Squad - We chat to Facebook's Claire O'Hara about our Smurfit Scholarship fund.
popular
Where are they now? The men of Sex & The City
Dad designs bikini line for transgender teens
Someone has ranked the penis size of men from all over the world
Award winning Irish film about conversion therapy debuting this weekend
The latest TikTok beauty trend is drawing on under-eye bags to look tired
Here's what happens on every day of your menstrual cycle (roughly)
Why Are Men so Obsessed With Boobs? The Answer is Pretty Surprising...
You may also like
4 years ago
The Creator Of Grey's Anatomy Just Gave The Most Inspiring Talk
5 years ago
Making It Rain - The Beckhams Made A Crazy Amount Of Money Last Year
5 years ago
Want To Know Exactly How Much Your Free Time Is Worth?
5 years ago
Was Your Flight Cancelled Today? Here's What You Need To Know About Your Rights
5 years ago
Apple To Create 1000 New Irish Jobs
5 years ago
The Big Question - How to Find a Mortgage You Can Live With
Next Page