An Irish restaurant has been forced to apologise after a promotion for their lunch deal featured a 'joke' about domestic violence.

The promotion was drawn on a chalkboard outside Belfast restaurant Ribs and Bibs.

Do not eat at Ribs and Bibs in Botanic Avenue, Belfast. Domestic violence is NOT a joke. Sickening. pic.twitter.com/6uvnJyMxzH

Following the sign's placement, many people took to social media to express their offence at the promotion.

As of Sept 27, the restaurant's Facebook page is currently unavailable.

@StephenNolan why does ribs and bibs on botanic avenue think this sign is ok? Its horrific and makes light of an issue that's killing people pic.twitter.com/tQCBbOshVw

Speaking to Belfast Live, a spokesperson for Ribs and Bibs said that the restaurant do not condone abuse "on men or women."

They also said the sign was written by a new member of staff.

"We do not condone abuse on men or women and the member of staff has only been working with us a couple of weeks and was on shift today by himself.

We are dealing with it and would like to apologise for any offence caused and it will be dealt with by the management team."

According to Women's Aid, one in five women in Ireland who have been in a relationship have been abused by a current or former partner. 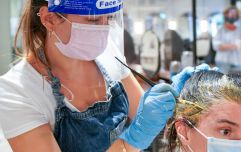 END_OF_DOCUMENT_TOKEN_TO_BE_REPLACED

In 2016 alone, 16,946 cases of domestic violence against women were disclosed to Women's Aid, with over 3,500 of those being physical abuse.

popular
How to turn 20 days of annual leave into 50 days off
Richard Madeley under fire for comments about Kate Middleton's waist
Man arrested after woman raped on train as passengers filmed it
WATCH: The first trailer for Ozark Season 4 just dropped
70-year-old woman reportedly becomes first-time mum after welcoming baby boy
Police search for missing 4-year-old girl in Australian outback
Police launch investigation after woman "spiked with needle" in UK nightclub
You may also like
3 months ago
Minister Josepha Madigan tells Dáil she is a survivor of sexual assault
3 months ago
Turkey withdraws from treaty to prevent gender based violence - but at what cost?
3 months ago
Chris Brown accused of hitting a woman in his home
3 months ago
Disclosures of domestic violence increase by more than 40% over past year
4 months ago
Domestic violence protests continue after discovery of six-year-old girl's body in Spain
4 months ago
Opinion: Survivors of domestic violence in Ireland deserve better
Next Page