A single mother from Donegal was taken from her home to Mountjoy Prison on Monday for not paying her television license.

The incident came to light this morning when Sinn Féin councillor Gary Doherty told Highland Radio that the woman was woken at 7.10am and informed that she was being taken "up the road" to the prison as a result of non-payment of a €450 fine.

"Now, by that stage the lady in question had been repaying the fine. She'd actually repaid €212 of the fine. It was deemed by whoever was in charge that day that it was worthwhile taking two Gardaí away from their duties here and taking her the whole way to Mountjoy." 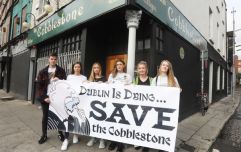 END_OF_DOCUMENT_TOKEN_TO_BE_REPLACED

The woman was held at Mountjoy's Dóchás Centre for three hours before being given a bus ticket home, a situation that Cllr Doherty has slammed as "absolutely ridiculous".

"It’s completely morally wrong to my mind to take this lady to the Dóchas centre in Mountjoy. It’s criminal misuse of Garda resources. When you think of the money it would cost. This woman had to be taken to Dublin in a taxi through Sligo and Longford to Dublin," he said.