A major development just a week out from 8 February.

The poll, which was conducted by The Times Ireland, reckons that Mary Lou McDonald’s party is the second most popular, at 21 per cent, followed by Fine Gael on 19 per cent. 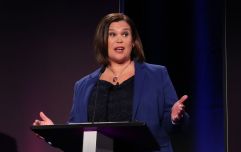 END_OF_DOCUMENT_TOKEN_TO_BE_REPLACED

Meanwhile, Fianna Fáil appear to be in pole position, with 23 per cent of the public's support, according to the poll.

Eamon Ryan's Green Party were at 10 per cent.

The Social Democrats, Labour and Solidarity-People before Profit are each on 5% ahead of the crucial day next Saturday.

The survey conducted by The Times saw 1,000 Irish people asked about which way they plan on voting, with a margin of error of 3 per cent.

Each party will continue their campaign trail through the weekend, with Taoiseach Leo Varadkar posting a video on his Twitter page featuring each member of his team stating that they would under no circumstances go into government with Sinn Féin.

The video has already gathered quite the response on social media.

I will never go into government with Sinn Féin. I asked my team if they would and they answered unequivocally.

popular
Around the world: The most popular baby names in major cities across the globe
Senator David Norris Reveals He Is Seriously Ill With Cancer
Netflix announces new true crime documentary series: The Vanishing At The Cecil Hotel
Not petite or plus size? 4 'mid-size' style influencers you should follow on TikTok
"The female gaze is brilliant:" Why Phoebe Dynevor is proud of Bridgerton's sex scenes
Someone has ranked the penis size of men from all over the world
When will lockdown end in Ireland?
You may also like
1 year ago
'A different perspective' Four female councillors reflect on Ireland's first 50/50 council gender split
1 year ago
Maria Walsh, former Rose of Tralee winner, to run as an MEP candidate for Fine Gael
3 years ago
Tánaiste Frances Fitzgerald has stepped down
3 years ago
New poll shows how Frances Fitzgerald scandal has hit Fine Gael
3 years ago
Fine Gael release statement about gender balance in the Government
3 years ago
An Post had a tough job trying to deliver this letter to Leo Varadkar
Next Page