Leo Varadkar has posted a pic of himself loading a dishwasher

Man of the people, indeed.

On Thursday evening, on the ninth day of November, many things of note occurred.

The John Lewis advert was not released despite multiple reports that it was due to appear on the retailer's Twitter "soon."

Forever 21 announced that they were closing their doors in Dublin, much to the dismay of many a shopper.

The most noteworthy thing to happen on Thursday evening, however, took place on the Facebook page of a very well-known politician.

Some have even gone so far as to say that this was the pivotal moment of 2017.

And, to be honest, they wouldn't be too far off the mark.

... Because yesterday evening, Taoiseach Leo Varadkar filled a dishwasher and posted a pic of himself on Facebook to prove it. 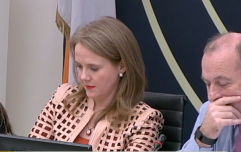 END_OF_DOCUMENT_TOKEN_TO_BE_REPLACED

Truly, truly something else.

Leo's photo came paired with the incredible caption: "... No-one gets away without packing the dishwasher around here."

Since Varadkar shared his pic, global peace has been achieved, climate change has been stopped in its tracks, and world hunger is no longer an issue.

Now, we don't know about you but we have many, many questions for Mr. Varadkar about this photo.

One thing is for certain though, and that's that we cannot wait to see this iconic moment on Reeling in the Years in about a decade.


popular
BRB, running to Penneys for the €19 trousers that look like they cost ten times the price
Here is where you should get engaged, based on your star sign
Say hello to the €40 Stradivarius dress you're going to be seeing everywhere in summer
Holly Willoughby's Zara shirt is the workwear must-have you need in your life
There's a prequel to The Umbrella Academy starring Klaus on the way
Prince Harry and Meghan Markle to attend Princess Beatrice's wedding despite 'snub' reports
Air New Zealand wants to introduce bunk beds on its flights for economy classes
You may also like
1 month ago
Leo Varadkar calls general election for Saturday, February 8
1 month ago
Leo Varadkar will reportedly call a general election for 7 February
4 months ago
'A system that was doomed to fail' Leo Varadkar apologises to women affected by CervicalCheck scandal
4 months ago
Leo Varadkar to offer State apology over CervicalCheck failures today
10 months ago
Leo Varadkar criticised over 'cringey' letter sent to Kylie Minogue from his department
11 months ago
Leo Varadkar weighs in on Ireland rejoining the Commonwealth
Next Page