An Irish father-of-five from Cork reportedly died last month after a spider bit him on the neck. The man in question was watching a movie when the incident occurred.

According to the Irish Sun, John Kennedy died from massive internal bleeding reportedly as a result of the bite.

The paper claims that before his death, Kennedy suffered from stomach swelling, organ failure and his eyesight failed.

"He got bitten. We found a spider with a weird red back," his wife Jeanne told the Irish Sun. "But the bite he got had bled very badly. We went through a roll and a half of toilet roll to try and stop it."

John was rushed into hospital in July of this year after he vomited blood and lost his eyesight.

"He was a stubborn man and he said he would be grand in the morning, it didn’t pass," Jeanne continued. "At midnight he said ‘call the ambulance’. The paramedics told me it wasn’t looking good." 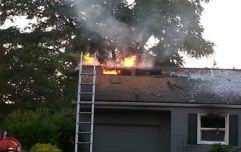 END_OF_DOCUMENT_TOKEN_TO_BE_REPLACED

John passed away the following day and an inquest has been ordered into his death.

The bite is believed to be from a spider called the poisonous red-back which is usually seen on the other side of the world but has reportedly been spotted here recently.

Hat tip to the Irish Independent.

popular
Paul Mescal wore O'Neill's shorts while carrying cans of pink gin so I bought O'Neill's shorts and cans of pink gin
This amazing hanging egg chair is coming into Aldi next week and go, go go (but safely)!
5 reasons why we need more videos of Doireann Garrihy's new puppy immediately
Lidl is launching a new hyaluronic skincare range and the serum is only €3.49
The Dalkey gaff where Matt Damon stayed during lockdown will be available to rent again soon
After days of silence, Scott and Sofia finally comment on the break up rumours
Thursday set to be the hottest day of the year, says Met Éireann
You may also like
2 years ago
Good luck sleeping after seeing the size of this spider in a Dublin home
4 years ago
An Irish man has invented a new spider catcher
4 years ago
Shocking Footage Shows Customer Arguing With Cashier After Giant Spider Found In Bananas
4 years ago
Sydney Police Called To A "Domestic Incident”…With A Spider
4 years ago
WATCH: Irish Mammy Tries To Kill A Spider With A Spatula And She Cannot Cope
4 years ago
WATCH: This Spider Found In An Irish Home Moves Terrifyingly Fast
Next Page