Temperatures will reach 25 degrees this week.

It looks like we're going to be in for another heatwave at the end of the week, however until then, there will be showers covering the country.

While temperatures will reach 19 degrees today, we're going to see rain and drizzle in the north east of the country, which will likely become heavy.

Met Éireann said: "Some brighter spells across the eastern half of the country to begin the day. Dull elsewhere with outbreaks of rain and drizzle extending northeastwards during the morning and afternoon; some heavier bursts are likely. Parts of the east may stay almost fully dry.

Brighter spells across the E half of the country to begin. Dull elsewhere,rain & drizzle extending N during the morning & aft; some heavier bursts are likely. Drier & brighter in the S later,rain turning patchier in other areas. Highs 16to19C, in light to moderate SW breezes. pic.twitter.com/xXinFIO3mL 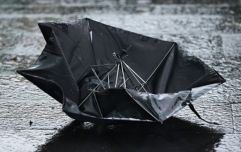 Met Eireann says that the effects of Storm Dennis will continue today, so brace yourselves

END_OF_DOCUMENT_TOKEN_TO_BE_REPLACED

"Becoming drier and brighter in the south later with rain turning patchier in other areas. Top temperatures of 16 to 19 degrees, in light to moderate southwesterly breezes."

It will be mostly the same tonight, along with some fog and mist.

"Rain and drizzle will become patchy early tonight with a lot of dry weather following. Some mist or shallow fog patches too. Later in the night southerly breezes will begin to freshen up along the west and southwest coast, and rain will move in off the Atlantic. Lowest temperatures 10 to 13 degrees."


popular
The PERFECT €22 Penneys dress everyone will be rushing to buy in the coming weeks
Louise Cooney just wore the most gorgeous €27 cream jumper from Marks and Spencer
The gorgeous Penneys trousers that are a must-have for your workwear wardrobe
Say hello to the perfect work dress, that will cost you just €19 in Penneys
Getting married in 2020? These ASOS bridesmaid dresses are seriously gorgeous
We just found the perfect 'jeans and a nice top' top, and it's only €17 in New Look
Penneys are now selling Riverdale t-shirts and yeah, we need them all
You may also like
4 days ago
Met Éireann have issued three new weather warnings for Storm Dennis
4 days ago
Met Éireann have issued an orange weather warning for two counties
5 days ago
Met Éireann issues rainfall warning for all of Ireland
6 days ago
Met Éireann have issued a weather advisory for all of Ireland ahead of Storm Dennis
6 days ago
According to Met Eireann, your weekend weather forecast is set to be VERY grim
1 week ago
A new Status Yellow snow/ice warning has been issued for 11 counties
Next Page