It looks like it's only going to get worse.

We certainly hope you were tucked up in bed last night as the rain came down on Ireland. It lashed for most of the night, and it looks like that's going to have a knock on effect for the weather today.

Met Éireann says that the "remaining overnight rain" will effect some parts of the country, with showers continuing to cover Ireland for most of the day.

"Remaining heavy overnight rain affecting northern parts of the country will soon clear this morning giving way to bright or sunny spells with showers today. Some of the showers will be heavy and prolonged with thunderstorms and a risk of hail.

Remaining heavy, occasionally thundery, rain over northern parts of the country will soon clear, giving way to bright or sunny spells and showers today. Some of the showers will be heavy, with the potential for flash flooding. Top temperatures 18 to 22 degrees. Shannon Radar N/A pic.twitter.com/ennbQtnD3X

"There is potential for flash flooding and poor visibility in localised downpours. Humid, and feeling warm in any sunshine, with top temperatures of 18 to 22 degrees Celsius. 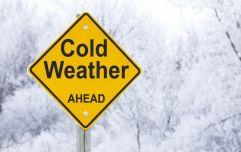 END_OF_DOCUMENT_TOKEN_TO_BE_REPLACED

"Rather windy in the south and east, with moderate to fresh and gusty southeast winds overland, strong to near gale at the coasts, but winds will be generally lighter elsewhere."

As for tonight, "further showers, some of them heavy, will continue to occur tonight. Otherwise, varying cloud amounts and clear spells. In southern counties, winds will veer southwesterly, increasing strong to gale force near the coast. Elsewhere, winds will be generally light to moderate variable, with mist and fog patches forming. Lows of 13 to 15 degrees."


popular
10 stunning – and unique – Irish baby names that are not too popular yet
Penneys is currently selling the PERFECT white blouse, and it's only €15
Everyone has the same prediction ahead of tonight's episode of Love Island
River Island's floral €60 dress is the first piece you'll want for your spring 2020 wardrobe
Chrissy Teigen did NOT hold back when responding to criticism of her son's outfit
Holly Willoughby wore a gorgeous €59 shirt from Massimo Dutti this morning
We are absolutely in love with this cute €29 teddy jacket from the Zara sale
You may also like
1 day ago
Met Eireann has issued a weather advisory for snow and sleet in Ireland
3 days ago
Met Éireann share the weekend weather forecast and we're just not that into it
5 days ago
'Misty and murky': Met Éireann predict the next few days will be a bit manky
1 week ago
Met Eireann says the forecast for the week will be dry, sunny and VERY cold
1 week ago
Met Éireann's forecast for the week is very, very chilly
1 week ago
Sleet and snow predicted for some parts of Ireland today, says Met Éireann
Next Page