The advances that the United States have made regarding LGBTQ rights have been dealt a severe blow today, after the decision made by North Carolina to pass a sweeping law that effectively removes the civil rights of their LGBTQ citizens at a state-wide level.

The Washington Post report that the bill was signed on Wednesday by Governor Pat McRory who said action must be taken quickly.

The legislation has been roundly condemned by LGBT rights organisations who say that legislators in the state have deliberately gone out of their way to stigmatise and marginalise LGBTQ people, particularly transgender people who will now be forced to use the bathrooms that correspond to their assigned gender on their birth certificates. 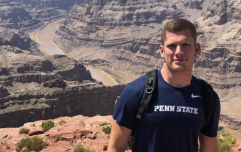 END_OF_DOCUMENT_TOKEN_TO_BE_REPLACED

According to WNCN, politician Tim Moore stated: “North Carolinians have spoken loud and clear that they are deeply concerned about what this ordinance means for the safety and expectation of privacy for women and children. In all the years I have served in the General Assembly I have never seen such a negative reaction to an ordinance passed by a municipality.”

The main problem critics had with the anti-discrimination laws was the fact that trans individuals would be allowed to use their preferred bathroom.

This discriminatory legislation has been deemed transphobic and people are currently lobbying for this backwards decision to be overturned, with many corporations, individuals and public figures voicing their disappointment at this setback for LGBTQ rights in North Carolina.

popular
Miracle baby on the way for bride whose partner died on wedding day
Why Are Men so Obsessed With Boobs? The Answer is Pretty Surprising...
Johnny Depp confirms he will be back as Grindelwald in Fantastic Beasts 3
Someone has ranked the penis size of men from all over the world
How to INSTANTLY unblock your stuffy nose (we swear this works)
Here's what happens on every day of your menstrual cycle (roughly)
Margot Robbie is reportedly pregnant with her first child
You may also like
3 weeks ago
Love Island boss says they're still trying to figure out how to make an LGBT version work
2 months ago
Amazon Prime launch new lesbian docu-series, and it's about time
3 months ago
10 books with LGBTQ+ themes to add to your reading list this Pride month
3 months ago
Sophie Turner very subtly comes out as... not straight
3 months ago
Penneys new Pride collection drops this month - and we want it all
4 months ago
Queen announces plans to ban conversion therapy in the UK
Next Page