The FSAI (Food Safety Authority of Ireland) found that the below food outlets weren't complying with legislation under the FSAI Act, 1998 and the EC (Official Control of Foodstuffs) Regulations, 2010.

Legends, a takeaway located at 63 Georges Street Upper, Dun Laoghaire, Co. Dublin, and Pizza House, another take away), in Kilmacow, Kilkenny were ordered to close after the FSAI demmed both establishments a flight risk. 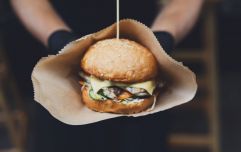 END_OF_DOCUMENT_TOKEN_TO_BE_REPLACED

Brennans Pork Shop, a butchers, with an address at 7&8 Dublin Street, and CarlowMing Court Restaurant, Blanchardstown Centre, Dublin 15 were also told to close their doors.

In addition to the closures, four businesses were served with prohibition orders under the EC (Official Control of Foodstuffs) Regulations, 201o.

Speaking to Newstalk, chief executive of the FSAI, Pamela Byrne said: "Food safety must be paramount. There can be zero tolerance for negligent practices that potentially put consumers’ health at risk".

"It is particularly important in the lead up to the busy Christmas period that food businesses ensure they can cope safely with the increased volumes of food they may supply".

Girls With Goals || Her · Ep.151: 'A Story Shared' - Aoife P. Rafter on blogging during a pandemic and living with CF
popular
Matthew Perry's dad was a character on Friends and how did we not notice?
New weather warning issued as Storm Christophe passes over Ireland
Joe Exotic has limo waiting as he expects presidential pardon from Donald Trump
Child hospitalised with head-lice as neglect goes unnoticed in lockdown, says report
Justin Timberlake and Jessica Biel confirm birth of second child
NPHET reportedly to advise all children return to school at end of February
Here's the average age people lose their virginity around the world
You may also like
11 months ago
Drinking coffee can help ease pain in some cases, according to research
1 year ago
Nutritionist says eggs are an essential breakfast food and we're okay with that
1 year ago
Eating a banana for breakfast is actually a pretty bad idea
1 year ago
Got your period? Try to avoid these foods as much as possible
1 year ago
This is why you should avoid ordering soup when out for a meal
1 year ago
Study shows people who go to sleep at this time consume more calories
Next Page