Partial solar eclipse to be visible all over Ireland this morning

Skygazers in Ireland will get to witness a crescent-shaped sun during an annular eclipse on Thursday.

A partial solar eclipse, where over a third of the sun will be covered, will be visible all over Ireland on Thursday morning.

Astronomy Ireland is encouraging people to get out and view the event, describing it as “a sight to see”. 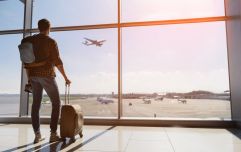 END_OF_DOCUMENT_TOKEN_TO_BE_REPLACED

A partial eclipse has not been visible in Ireland since March 2015 and won't be again for several years.

An annular eclipse takes place when the moon passes in front of the sun but does not block it entirely, resulting in a bright ring of light around the darkened moon – the so-called ‘ring of fire’.

“Unfortunately we won’t see the ring of fire in Ireland - that hasn’t happened in around four decades - but we will see a crescent shape around the moon for two and a half hours,” explains Dr. Gia L from Astronomy Ireland.

The event will begin with the “first bite” being taken out of the sun at 9.58am and will end at 12.19pm. Times will vary by several minutes depending on location.

Given the unpredictable Irish weather, Astronomy Ireland is recommending people “view the whole event in the hope of seeing something if only through a tiny break in the clouds”.

People in Donegal are set to have the best view of the rare event, although it should, weather permitting, be visible across the country.

If you are checking the skies tomorrow, remember that looking directly at the partial eclipse with the naked eye can cause permanent damage to the eyes instantly and appropriate protection must be worn.

You can watch the solar event live-streamed here.

Girls With Goals || Her · Ep.161: Feeling Peachy - Sharon Keegan of Peachylean on being an absolute BOSS!
popular
Khloe Kardashian has JUST confirmed she is pregnant
The DIY frozen coffee recipe that's so delicious you'll never pay for an iced latte again
Here's what happens on every day of your menstrual cycle (roughly)
How to INSTANTLY unblock your stuffy nose (we swear this works)
10 signs that your Gilmore Girls binge has gone way too far
Someone has ranked the penis size of men from all over the world
The First Quadrillionaire? Paypal Accidentally Gives Man $92 Quadrillion
You may also like
3 days ago
Good weather coming to an end as Atlantic system to bring rain and "unsettled" conditions
4 days ago
New powers to allow Gardaí request the passcode for smartphones
1 week ago
Covid-19 patients in ICU in Ireland at its lowest level this year
1 week ago
Met Éireann confirms "tropical airmass" to hit Ireland this week with highs of 23 degrees
1 week ago
Mayor slams "disgusting" act as pride flags burnt in Waterford City
2 weeks ago
Plenty of sunshine and temperatures of 25 degrees set to hit Ireland next week
Next Page