The plans are progressing, but don't go binning your Leap Card just yet.

A new programme is being launched in an attempt to "fundamentally transform" how customers pay for and use transport services in Ireland.

Although there are a number of changes and ideas proposed as part of the programme, one stands out above the rest - customers will be able to use contactless credit/debit cards, mobile phone payment wallets or mobile apps to pay for public transport.

According to plans laid out by the National Transport Authority (NTA), the cost of that travel will be aggregated and charged in a single post-pay transaction which guarantees the customer the best possible price for their individual travel patterns.

The NTA is expected to commence the process to tender for a supplier in early 2020 but it would ultimately not see the Leap Card being replaced in Ireland until 2027.

As well as the cashless transactions potentially becoming a regular feature of public transport, the NTA has also proposed self-service ticketing, meaning there would be no driver interaction at all for mass transit bus services. 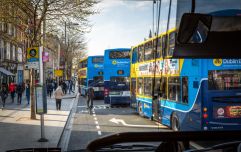 END_OF_DOCUMENT_TOKEN_TO_BE_REPLACED

A spokesperson for NTA told JOE: "The Next Generation Ticketing programme is a strategic programme designed to fundamentally transform how customers pay for and use transport services."

So like we say, change could well be on the way, but don't go throwing away the leap cards just yet.


popular
These blue mom jeans from Penneys are actually unreal, and they're only €17
Kate Middleton is wearing an amazing red glittery gown tonight and she looks like a princess
Brad Pitt and Jennifer Aniston's SAG Awards backstage moment was pretty decent
The €54 M&S dress that is perfect for the changing weather
The flattering €16 Penneys dress we'll be wearing every day for the foreseeable future
We finally know the identity of baby Archie Harrison's godparents
The €15 Dunnes Stores top that we're totally obsessed with at the moment
You may also like
1 year ago
New taxi restrictions means there will be increased fares for travelling in the city
1 year ago
The Luas is getting FOUR new tram lines all across Dublin
1 year ago
It looks like commuters could be facing longer travel times in the city centre
1 year ago
Why are taxi fares going up? The price hike was confirmed today
4 years ago
Bus Eireann And Dublin Bus Staff To Go On Strike This May
5 days ago
Aer Lingus unveil new uniforms, with women wearing trousers for the first time
Next Page