Police confirm that the body of Emiliano Sala has been found

It was confirmed last night.

The body recovered from the wreckage of a plane at the bottom of the English Channel has been confirmed as Emiliano Sala.

The 28-year-old footballer and the pilot of the plane were travelling from Nantes, France to Cardiff when it went missing from radar.

It has been a grueling few weeks for the two families involved, with intense searches being carried out.

Police said the families of Mr Sala and the pilot David Ibbotson have been informed.

In a statement last night, the police said that they "will continue to be supported by specially-trained family liaison officers. 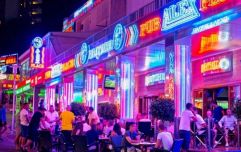 END_OF_DOCUMENT_TOKEN_TO_BE_REPLACED

"Our thoughts remain with them at this difficult time."

"HM Coroner will continue to investigate the circumstances of this death supported by Dorset Police."

In a statement, Cardiff City Football Club said:"We offer our most heartfelt sympathies and condolences to the family of Emiliano. He and David will forever remain in our thoughts."

Our hearts go out to everyone involved in this tragic event.


popular
Say hello to the €40 M&S dress that will instantly brighten your spring wardrobe
Met Éireann issue low temperature weather warning for 25 counties
The €30 New Look skirt we're going to be living in for the next few weeks
Tried and tested: I got my eyebrows laminated, and I'm absolutely weak for myself now
Groom calls his fiancée a 'toddler throwing a tantrum over a sparkly toy' for not wanting to buy a €90 wedding dress
Future planning: The 2020 baby names predicted to make the most money in their lifetime
Emmerdale 'confirm' when Graham Foster's killer will be revealed
You may also like
18 hours ago
Céline Dion's mother Thérèse has passed away aged 92
1 day ago
Francis Brennan's mother has passed away at the age of 97
1 day ago
Three-part documentary series about the death of Jeffrey Epstein is being made
2 days ago
Nóra Quoirin's parents will be on The Late Late Show this week
2 days ago
A homeless woman in her 20s has died in a Dublin hostel
2 days ago
Dunnes introduce a new range of clothing for children with additional needs
Next Page