21-year-old Dorian Powell was discovered dead over a week ago having suffered fatal stab wounds.

Police in California announced the arrest of Nakasia James on Sunday following the teens admission on Facebook.

It is believed the couple were involved in a domestic dispute which turned violent.

END_OF_DOCUMENT_TOKEN_TO_BE_REPLACED

Police discovered James in the 400 block of North Hamilton Avenue in Hemet, located about 40 miles southeast of San Bernardino California.

KTLA report that police received a call regarding a person “who had reportedly been stabbed by his girlfriend,” according to a news release issued that day. 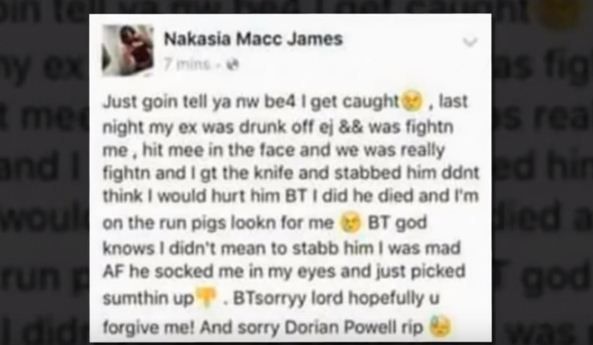 Image via The Digital Journal

END_OF_DOCUMENT_TOKEN_TO_BE_REPLACED

The status which was posted to Facebook on Monday evening read:

“Just goin tell ya nw be4 I get caught, last night my ex was drunk off ej && was fightn me . hit mee in the face and we was really fightn and I gt the knife and stabbed him ddnt think I would hurt him BT I did he died and I’m  on the run pigs lookn for me BT god knows I didn’t mean to stab him I was mad AF he socked me in my eyes and just picked sumthin up. BTsorryy lord hopefully u forgive me! And sorry Dorian Powell rip” [sic]

The confession has since been removed but screenshots have been circulating online provided by The Hemet Police Department.

popular
Mum charged with murder after allegedly leaving baby in hot car
Vogue Williams slams man who refused to swap seats with her on plane
This is the exact date the weather will get warm again
Are we getting a mini heatwave in September?
New Zealand family find two bodies in second hand suitcases
Crown Paints advert receives 200 complaints over 'misogyny' and 'everyday sexism'
Why Are Men so Obsessed With Boobs? The Answer is Pretty Surprising...
You may also like
1 week ago
Actress Anne Heche in coma following car crash
1 week ago
The cost-of-living crisis is having a disproportionate impact on women, charity warns
2 weeks ago
Government approves new standalone stalking offence Bill
2 weeks ago
Man involved in Lady Gaga dog-walker robbery jailed for 4 years
2 weeks ago
Archie Battersbee's life support treatment to end at 2pm tomorrow
2 weeks ago
Shakira could face 8 years in prison over tax fraud
Next Page