The route for Dublin's underground tram has just been revealed

Does it pass by your home? Or work?

The proposed route for Dublin's first ever underground has been revealed today.

The public transport service will be the first of its kind in Ireland - presuming all goes to plan. 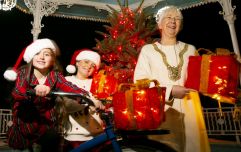 END_OF_DOCUMENT_TOKEN_TO_BE_REPLACED

The Metrolink, as it's being called, will run from the northside of the city, all the way out to the southside, spanning from Swords to Sandyford.

According to the proposal, there will be 25 stations, 15 of which will be brand new, and it's predicted that 15 thousand passengers will use the service every hour during rush hour.

The trams will run every two minutes from the city centre to Dublin Airport, also.

Here are the proposed stops: The service is going to cost €3 billion for the country, and won't be completed until 2027 (but we all know it'll no doubt be a few years after that).

Transport Infrastructure Ireland CEO Michael Nolan said: "We remain open to looking at other proposals, and if people or communities feel there are better ways of doing it, we will of course be happy to consider any alternatives put forward."

popular
Balenciaga is suing production company following offensive ad campaign
The trailer for Channel 4's Vardy V Rooney: A Courtroom Drama has dropped
Olivia Wilde struggling after Harry Styles break-up
"I've got nothing to hide": Ekin-Su confronts Davide over afterparty video
Kim Kardashian addresses Balenciaga's disturbing campaign
Olly Murs slammed over 'misogynistic' lyrics in 'shocking' new single
How to INSTANTLY unblock your stuffy nose (we swear this works)
You may also like
2 weeks ago
Westlife set to perform Dublin's New Year's Eve festival
1 month ago
Best meal deals in Dublin for when you're low on funds
1 month ago
PSA: Michael Bublé is coming to Ireland in 2023
1 month ago
Funeral details announced for Kate Donohoe and her son Vincent
2 months ago
5 delicious brunch spots around Ireland to try out on your next trip with the girls
2 months ago
Christmas lights will be turned off early every night this year
Next Page