Save the 8th has released a statement following last night's exit poll and this morning's early tallies.

The anti-abortion campaign has said that yesterday's referendum was "a tragedy of historic proportions" and that "a wrong does not become right simply because a majority support it."

"The 8th amendment did not create a right to life for the unborn child – it merely acknowledged that such a right exists, has always existed, and will always exist.

"What Irish voters did yesterday is a tragedy of historic proportions. However, a wrong does not become right simply because a majority support it."

END_OF_DOCUMENT_TOKEN_TO_BE_REPLACED

Early tallies and two separate exit polls show that the 'Yes' side is expected to win by a landslide.

END_OF_DOCUMENT_TOKEN_TO_BE_REPLACED

Save the 8th said that going forward they will continue to oppose the legislation around abortion in Ireland.

"If and when abortion clinics are opened in Ireland, because of the inability of the Government to keep their promise about a GP led service, we will oppose that as well," they said. 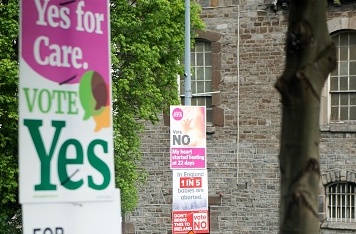 "Every time an unborn child has his or her life ended in Ireland, we will oppose that, and make our voices known."

The group have said they are "committed" to providing abortion care in Ireland.

"The Yes vote ends decades of stigma, shame and silence around abortion and unintended pregnancy. It ends the rejection and abandonment of women by the state.

"The IFPA will continue to support women who experience crisis pregnancies though whatever decision they make. But we now look forward to the time when we can offer them the care they need here in Ireland."

The official result for the referendum is expected this afternoon.

popular
Mollie King announces death of her father just weeks after welcoming her first child
Stevie Nicks leads tributes following the death of Christine McVie
Gifts for Him: 18 affordable presents for your old fella, brother or boyfriend this Christmas
Here are the first four people officially heading onto Dancing With The Stars
Gwen Stefani reportedly pregnant with baby number four
Science says this is how many dates you have to go on before you find 'The One'
Why Are Men so Obsessed With Boobs? The Answer is Pretty Surprising...
You may also like
19 hours ago
Expecting a baby in December? These are the top Christmas-inspired baby names
19 hours ago
Kendall Jenner and Harry Styles are 'just friends', insider claims
20 hours ago
Opinion: Don't point out your friends' eating and drinking habits this Christmas
20 hours ago
Revealed: The correct date you should be putting up the Christmas tree
1 day ago
Woman left confused after DNA test shows child isn't husband's despite her claims that she never cheated
1 day ago
Gift Guide: 15 unique Irish presents for Him, Her and Kids this Christmas
Next Page