They're colourful, sweet and chewy.

But according to a new lawsuit against Mars, the makers of Skittles, the sweets contain a toxic ingredient that Mars concealed information about from consumers.

According to the civil lawsuit filed earlier this week in California, a federal court alleges that Skittles candies, which boast the slogan “taste the rainbow” on account of their many colours, contain a “known toxin” called titanium dioxide, rendering them “unfit for human consumption”.

According to the the New York Post reporting on the case, titanium dioxide is used in paint, adhesives, plastics and roofing materials, and can cause DNA, brain and organ damage, as well as lesions in the liver and kidneys.

It is being banned in most EU countries already, and the civil suit contends that Mars has long known about alleged risks associated with this chemical and, in February 2016, publicly vowed that it would phase out titanium dioxide. After France banned titanium dioxide in 2019, Mars said that it would comply with this regulation, court papers state.

The lawsuit alleges that Mars “blew smoke” with that promise six years ago, by intimating that the phase-out was just because “consumers today are calling on food manufacturers to use more natural ingredients in their products”. 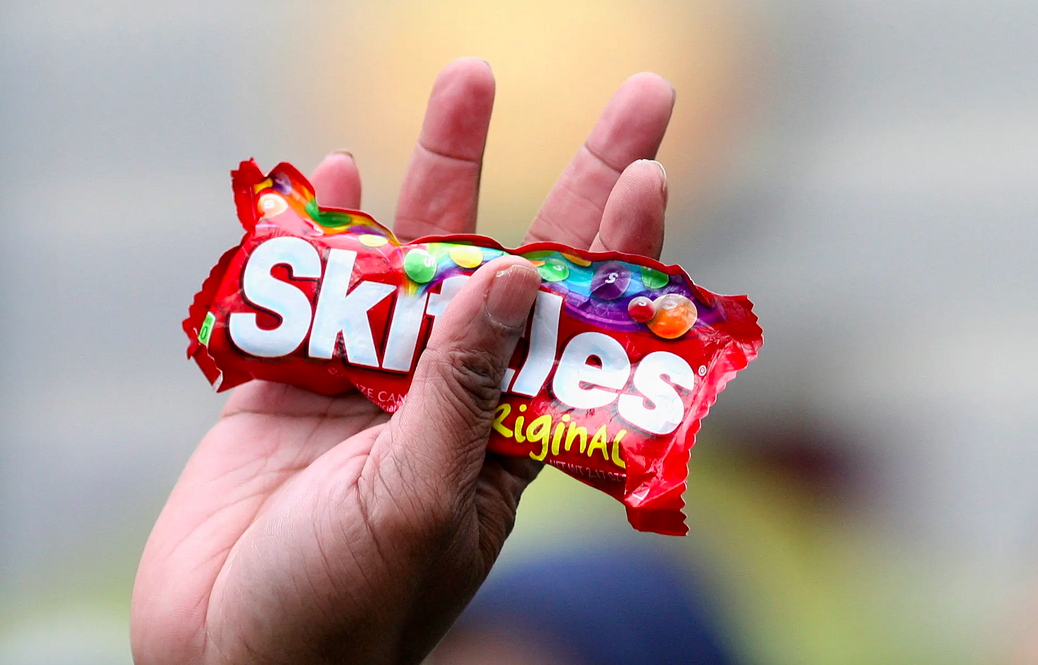 “Incredibly, Defendant even claimed that ‘[a]rtificial colours pose no known risks to human health or safety’,” the lawsuit also said. “In doing so, Defendant concealed from consumers material information it knew.”

Jenile Thames filed suit against Mars Inc, the confection company that produces Skittles, seeking class-action status and alleging that people who consume Skittles “are at heightened risk of a host of health effects for which they were unaware stemming from genotoxicity – the ability of a chemical substance to change DNA”.

Thames contends that Mars still sells candy in the US that contains titanium dioxide as an additive and is “failing to inform consumers of the implications of consuming the toxin”. (Ingredients lists vary, some saying they might or might not contain titanium dioxide.)

“Instead, Defendant relies on the ingredient list which is provided in minuscule print on the back of the Products, the reading of which is made even more challenging by the lack of contrast in colour between the font and packaging, as set out below in a manner in which consumers would normally view the product in the store,” court papers contend.

According to the European Food Safety Authority, titanium dioxide is “a pigment commonly used to provide a cloudy effect and white background colour”, and is typically used in candy and baking. In 2021, the authority announced that “titanium dioxide can no longer be considered safe as a food additive”.

“A critical element in reaching this conclusion is that we could not exclude genotoxicity concerns after consumption of titanium dioxide particles,” the authority said.

popular
Brighten up your Christmas with these affordable festive lights, coming to Lidl next week
Shawn Mendes (24) is reportedly dating Dr Jocelyne Miranda (50)
3 simple tips to get your nails in shape ahead of Christmas
Why Are Men so Obsessed With Boobs? The Answer is Pretty Surprising...
Irish wellness brand cancel Cork pop-up following explosion on ship full of stock
Apparently this is the best date to put up your Christmas tree
David Walliams has reportedly quit Britain's Got Talent following offensive comments
You may also like
1 week ago
Place In The Sun star Jasmine Harman tears up during emotional episode
1 week ago
Spencer Matthews to climb Everest in bid to find brother's body
2 weeks ago
David Walliams could be removed from Britain's Got Talent following 'offensive' remarks
2 weeks ago
David Walliams recorded making sexually explicit comments about BGT participant
1 month ago
Emma Watson pays touching tribute to Harry Potter co-star Robbie Coltrane
2 months ago
Budget 2023: Parents will not have to pay for primary school books from next year
Next Page