An international alert has been issued in the country.

The alert has been issued after Spain saw its largest ever listeria outbreak as numbers rose to 150.

A 90-year-old woman has died from the infection, and there's more than 500 suspected cases around various hospitals. 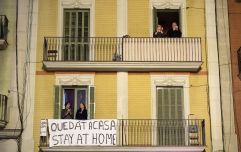 END_OF_DOCUMENT_TOKEN_TO_BE_REPLACED

Listeriosis is caught from eating food that contains listeria bacteria and is commonly found in unpasteurised milk, soft cheeses and ready-made items, such as sandwiches.

There are fears tourists might contract the illness as 80 million travel to the country for holidays each year.

Listeriosis usually causes a mild illness however, if you have a weakened immune system or are pregnant, it can be more dangerous.

According to Sky News, it has been confirmed that the outbreak began in the southern region of Andalusia, where a packaging pork plant has been linked.

"Now we need to carry out the inspections and investigations to figure out exactly where this failure took place."

Girls With Goals || Her · Ep.156: 'Beauty Returns' - Rebecca O'Keeffe is BACK and we're talking about viral beauty trends
popular
RTÉ wins rights to Harry and Meghan's Oprah interview
Pregnant women advised after four preliminary stillbirths linked to Covid in Ireland
Palace source says THIS incident on the tour of Australia upset Meghan's staff
Rare "Sahara dust" weather event expected to hit Ireland this week
Kate Middleton has addressed the rumours that she's pregnant with her fourth child
"He told me I had cervical cancer, but then he said - you will be okay"
Aisling Bea is reportedly dating a leading Hollywood man
You may also like
1 year ago
Ladies, you can actually rent an entire castle in Spain with your mates (for €30 a night)
1 year ago
Boozy holidays in the Balearic Islands will change as new laws crack down on alcohol-fuelled trips
1 year ago
My Camino with Maria Walsh Day 9: Take time for yourself and make no apologies about it
1 year ago
My Camino with Maria Walsh Day 8: Mixed emotions as we approach our final destination
1 year ago
My Camino with Maria Walsh Day 1: Why I'm walking 'The Way'
1 year ago
People are living for Stradivarius' €46 blazer jumpsuit that looks like a dress
Next Page