Did you spot this moment of absolute SHADE on last night's Prime Time debate?

A lot happened on the Prime Time debate on RTÉ One last night. The debate which occurred between both the "No" and the "Yes" sides on whether or not we should repeal the 8th amendment was an intense watch to say the least.

The Minister for Health, Simon Harris, and Sinn Fein's Peadar Tóibín took to the hot seats to thrash it out and Simon Harris quickly won praise from the public for his calm and authoritative argument on why we should repeal the 8th amendment. 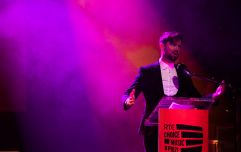 END_OF_DOCUMENT_TOKEN_TO_BE_REPLACED

And while last night's show was a heavy watch packed with important information, there was one moment that provided the public with a little giggle mid-watch.

That was when Prof Mary Higgins gave the ULTIMATE side eye when discussing why she was in favour of repealing the 8th. The women sitting besides her shakes her head while Mary is speaking which leads her to serving her this look. It is everything.

And it is safe to say everyone loved it.

I actually think I love this woman ?
That look though.....#primetime pic.twitter.com/TruVKxng2j

Mary Higgins is a queen ?? pic.twitter.com/Gm6jOE6sYc

We agree, what a moment.

Want to know more about last night's debate? You can read all about why everyone was loving our Minister for Health, Simon Harris here.

Girls With Goals || Her · Ep.161: Feeling Peachy - Sharon Keegan of Peachylean on being an absolute BOSS!
popular
Big Brother star left temporarily blinded and scarred after TikTok DIY beauty 'hack'
The First Quadrillionaire? Paypal Accidentally Gives Man $92 Quadrillion
How to INSTANTLY unblock your stuffy nose (we swear this works)
QUIZ: How well do you really remember the first episode of Friends?
Prince Harry says he wants to "break the cycle" of generational pain for his kids
Someone has ranked the penis size of men from all over the world
Here's what happens on every day of your menstrual cycle (roughly)
You may also like
20 hours ago
Seth Rogen joins Ryan for this week's episode of The Late Late Show
1 week ago
Rachael Blackmore joins Ryan for tonight's Late Late Show
3 weeks ago
New RTÉ series goes behind the scenes at the DSPCA and it looks ridiculously adorable
4 months ago
WATCH: A documentary about the two men who got married to avoid tax is coming to RTÉ
4 months ago
New series of Reeling In The Years to air on RTE this spring
5 months ago
Late Late Toy Show accused of "using kids to promote vaccine"
Next Page