Storm Brendan has passed but there's still a risk of strong winds, hail and thunder

It's not looking great.

Storm Brendan pretty much battered the country yesterday, however even though the weather warnings have been lifted and the storm has seemingly passed, it will still be a very rough and breezy day.

The weather forecaster said that there may even be a risk of hail or thunder as the evening goes on. 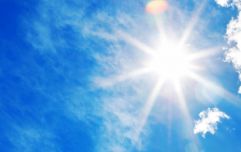 END_OF_DOCUMENT_TOKEN_TO_BE_REPLACED

Met Éireann said: "Cold today, with scattered showers at first. More persistent rain will extend from the southwest during the morning and early afternoon, with some sleet and hill snow.

"There will be some heavy and possibly thundery falls, mainly in parts of Munster and Leinster, but amounts will be smaller in the west and northwest. Clearer conditions, with scattered showers, will extend from the west during the afternoon and early evening.

Cold today, showers at first. Persistent rain will extend from the southwest during the morning & early aft, with some sleet and hill snow.Heavy & possibly thundery falls, mainly in Munster & Leinster. Scattered showers later. Highs generally 3 to 6C, but milder in the SE. pic.twitter.com/N790NKi5mV

"Maximum temperatures 3 to 6 Celsius generally, but milder in the southeast. Winds becoming mostly light to moderate southerly or variable for a time, later mostly moderate west to southwest. However, but it will become very windy on the southeast coast for a time in the afternoon, with strong and gusty southwesterly winds."

Meanwhile, tonight will be very much the same, with winds and frost.

Be careful out there!

popular
Deirdre Morley issues medical negligence action against HSE and hospital
And Just Like That... episode 8: Nobody saw this one coming
People are only realising Kendall Jenner and Gigi Hadid are related and the reactions are gas
Ben Foden's wife Jackie says it is "not possible" for him to cheat on her
Love Island's Amber Gill could be banned from Instagram over ad controversy
These are the top baby names for 2022
Downton Abbey's Michelle Dockery has gotten engaged
You may also like
7 months ago
Met Éireann forecasts outbreaks of rain for rest of the week
1 year ago
'Misty and murky': Met Éireann predict the next few days will be a bit manky
1 year ago
Sunny spells and patchy drizzle: The weather forecast isn't the *worst* today
2 years ago
Met Eireann says the forecast for the week will be dry, sunny and VERY cold
2 years ago
Sleet and snow predicted for some parts of Ireland today, says Met Éireann
2 years ago
A weather warning has been issued for 17 counties in Ireland
Next Page