The winds caused the plane to reach speeds of more than 800mph.

Storm Ciara is arriving in Ireland and the UK today with more (but different) bad weather set to arrive directly behind it.

However, one of the unexpected side effects of the high winds from the storm is that it may have caused British Airways to break a speed record, after FlightRadar24, an online flight tracking service, recorded that a British Airways Boeing 747 departing JFK airport on Saturday reached Heathrow in 4 hours 56 minutes shortly after 11.20pm. 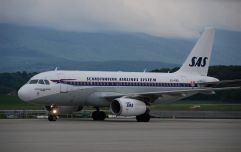 A flight bound for one city accidentally landed in the wrong city... again

END_OF_DOCUMENT_TOKEN_TO_BE_REPLACED

The flight normally takes 6 hours 55 minutes, meaning that the high winds from Storm Ciara cut two hours from the passengers' flight time, and the new time sets a record for non-supersonic aircraft.

The previous record, by Norwegian Airlines in January 2018, was set when a New York to London flight was completed in 5 hours 13 minutes.

According to FlightRadar24's tracking tool, the peak speed of the flight was approximately 825mph, with The Independent reporting that the aircraft was able to take advantage of 200mph jet stream over the Atlantic.

A BA spokesperson did tell them that: "We always prioritise safety over speed records, but our highly trained pilots made the most of the conditions to get customers back to London well ahead of time."

Girls With Goals || Her · Ep.153: Scholarship Squad - We chat to Facebook's Claire O'Hara about our Smurfit Scholarship fund.
popular
Dad designs bikini line for transgender teens
Where are they now? The men of Sex & The City
REVIEW: 'Pilgrim Hill' - A Lonely Life in Rural Ireland
Someone has ranked the penis size of men from all over the world
Award winning Irish film about conversion therapy debuting this weekend
WATCH: The trailer for the Free Britney documentary is here
Here's what happens on every day of your menstrual cycle (roughly)
You may also like
1 year ago
Planning a holiday in 2020? Here's a trick to get a cheap flight
1 year ago
Boarding pass hack will turn your phone into a mounted TV during your flight
1 year ago
'Hundreds' of passengers had to sleep on the floor of Dublin Airport last night
2 years ago
The skincare tip you'll want to follow before your next flight
2 years ago
Aer Lingus just announced a new route from Cork to a very popular destination
2 years ago
This hero crew member stepped in and comforted Anna Daly's baby on a flight
Next Page