This Can't Be Write? Woman Finds Pen Lodged In Stomach For Six Months

A Taiwanese woman suffering ‘unbearable’ stomach aches was stunned when she found the root of her problems – a fountain pen lodged in her stomach.

The 20-year old was in pain for more than six months before the foreign object was removed at a hospital in Taipei.

The item was left undetected by her doctor, and was only discovered when a four inch pen showed up on an X-ray during an endoscopy procedure.

Although the woman says she doesn’t remember swallowing the pen, she believes she could have swallowed it while drunk at an end of exams party. 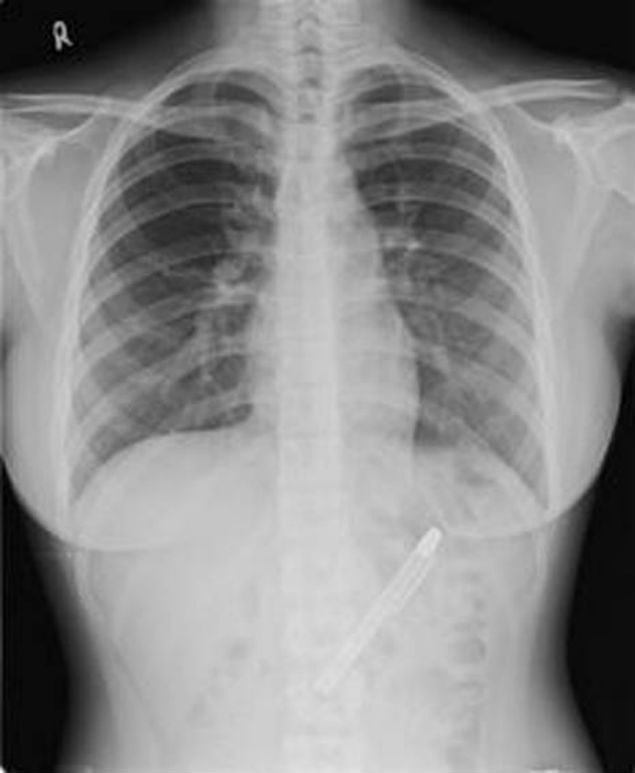 popular
Ben Foden's wife Jackie says it is "not possible" for him to cheat on her
Cavan parents remember teenage son as "character of the family" on emotional PrimeTime interview
Deirdre Morley issues medical negligence action against HSE and hospital
Downton Abbey's Michelle Dockery has gotten engaged
And Just Like That... episode 8: Nobody saw this one coming
People are only realising Kendall Jenner and Gigi Hadid are related and the reactions are gas
These are the top baby names for 2022
You may also like
2 years ago
Doctors perform c-section on a woman who wasn't actually pregnant
2 years ago
Female graduates in 'sexy' clothing are less likely to become successful according to this study
3 years ago
This 104-year-old drinks Diet Coke everyday and believes it's her secret to a long life
3 years ago
There's one food group you should always avoid before bed
3 years ago
Woman filmed drying her knickers with overhead vent on an airplane
3 years ago
Fans are freaking out over Nathan Carter's latest snap with mystery woman
Next Page