Brought to you by the Shark Awards Kinsale

And now we're eager to get our own creative juices flowing.

Last week, countless young and aspiring creatives from all over the world headed to Kinsale for the Young Shark Awards. Here, they simply had to muster up just one thing — the perfect way to promote the Shark Awards Kinsale next month (September 18 to September 21).

The Shark Awards Kinsale is the spot for excellent creative talent to finally get recognised and so we can't sing its praises enough. Don't forget, no matter your craft, whether it be branded content, film, music, digital design, social media — you name it — it's entirely worthwhile entering and spending a weekend exploring a world of so many different ideas and mingling among like-minded creatives.

As for the Young Sharks competition that took place recently, there were countless innovative ideas, contrasting views and individual minds coming together, meaning the judges had indeed, a hard task at hand. They had the job of whittling all these ideas down to leave just one that would take first place.

Well, Lewis Aramayo, from Australia, proposed that the Shark Awards team create an Instagram page named 'a_shark' where they could follow creatives around the world. Once the attention of these creatives had been caught, they'd then be encouraged to enter the competition by DM.

Lewis, from Sydney, who's currently working at Ogilvy as a copywriter said:

"Winning a trip to the Kinsale Shark Awards is a huge feather in the cap. It's not every day you get to rub shoulders with the best creatives in the biz, gain valuable career experience and drink pints of Guinness along the way. I feel very lucky to have won the opportunity… must be the luck of the Irish!"

AND THE YOUNG SHARK WINNER IS ... Copywriter @ogilvy Sydney Lewis Aramayo for his campaign ‘A Shark is following you’. “Winning a trip to the Kinsale Shark Awards is a huge feather in the cap. It’s not everyday you get to rub shoulders with the best creatives in the biz, gain valuable career experience and drink pints of Guinness along the way. I feel very lucky to have won the opportunity.... must be the luck of the Irish ☘️ ” #KinsaleSharks #SharkAwards #YoungShark #Creativity #Advertising #Sydney #OgilvyAUS 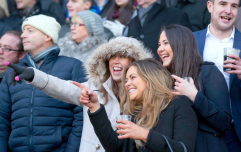 END_OF_DOCUMENT_TOKEN_TO_BE_REPLACED

So what helped Lewis nab the top prize? Well, in the words of Young Shark Judge Shay Madden (Rotcho Art Director), 'Sometimes the best ideas are the simplest… and Lewis' one is a brilliant example and one that the festival could activate at little cost.'

"It really smartly targets creatives all around the world… piques their curiosity with the message 'A shark started following you' while also leveraging the perfect social platform for the festival to open up further direct communication."

To meet Lewis and plenty more creative types from across the globe, be sure to get your tickets to the Shark Awards Kinsale taking place next month from September 18 to September 21! G'wan!

Brought to you by the Shark Awards Kinsale

Check out the tickets on sale for the Shark Awards Kinsale right here.

popular
Will there be a second season of Gilmore Girls: A Year In The Life? Here's what we know
Kate Middleton has addressed the rumours that she's pregnant with her fourth child
Paloma Faith announces that she is pregnant after long IVF journey
Eight Of The Best Films And Documentaries On 9/11
Here's what happens on every day of your menstrual cycle (roughly)
10 Dublin restaurants with outdoor areas we'll be hitting up for the next 3 weeks
The Queen has banned Meghan Markle from wearing any of Princess Diana's jewellery
You may also like
22 hours ago
Remember sex education? The Her team share how they learned about the birds and the bees
22 hours ago
Fact Not Fiction: Just how much do you know about vaginas and sexual health?
22 hours ago
Distanced dating: The go-to guide for getting back on the horse
1 day ago
Amp up your activity appetite with Gym+Coffee's flattering new workout line
1 week ago
Looking to buy your first home in Cork, Limerick or Galway? Kickstart your mortgage by attending this virtual First Time Buyers Masterclass
1 week ago
Attention students! Fancy winning €4,000 worth of prizes from Boojum including a Macbook, Netflix and more?
Next Page